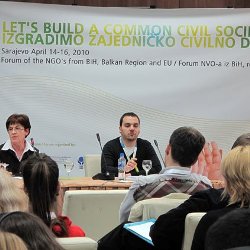 – The opening of the Forum: Inzko and Hartman

At the opening meeting, the participants were welcomed by the High Representative and EU Special Representative for BiH, Valentin Inzko, who gave full support to the objectives of the Forum, and journalist, author and expert in the situation in the region, Florence Hartman, who pointed out that civil society forum is intended to create an alternative to omnipresent political situation in BiH. 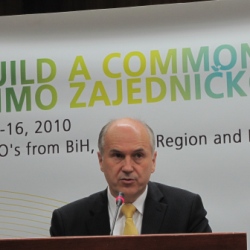 European Union Special Representative in BiH, Valentin Inzko, left, stressed that it is important to perserve in building a democratic, intercultural, civic-oriented BiH society: "The goals of this board are aligned with the program of the Euro-Atlantic integration, which is in Bosnia put on hold because of political blockage. You need to be involved in this process, because the BH politicians can not or will not do the job."

Inzko especially welcomed the fact that participants of the Forum are fighting against the domination of an ethno-national divisions, and expressed hope that during the three-day work to reach concrete proposals that will improve the efficiency of future work of civil society in BiH.

"Progress is only possible if citizens take the lead", concluded Inzko. 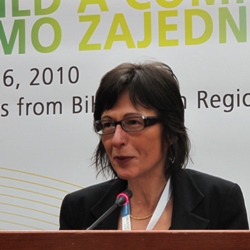 Florence Hartman, left, pointed out that this forum is an opportunity to exchange experiences and to identify points that connect all participants, so that they often coordinate their forces in order to successful and efficient operation: "You, as the civil society can together, show everyone in Europe that the divide can be overcome, that coexistence is possible and that it is in the interest of peace, genuine democracy and social progress and freedom of every citizen."

Hartman added that the forces separating men and courage to overcome divisions.

"Summarize your efforts, you will be surprised how much you can achieve together", she concluded.

More than 100 participants, representatives of more than 50 NGOs from BiH, Balkan region and EU countries discussed the priorities and modalities of future cooperation for the empowerment of civil society in BiH, which is fighting for a democratic, civic-oriented Bosnia and Herzegovina, without any of ethnic divisions. 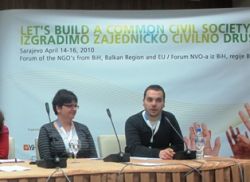 · to develop joint projects of NGOs from Bosnia and Herzegovina and other European countries;

· to organize a campaign for the "first" voters (those who will vote for the first time) in the forthcoming October elections in BiH;

· to create a network / coordination / NGO umbrella association of local communities in BiH;

· to organize a series of debates in local communities about the EU and how the process of European integration affects the quality of life of every individual in BiH;

· to develop the idea of "The House of Civil Society" / "Academy of democracy" – an open and safe place for meetings and debates of civil society and create a base-data success stories from the field to overcome the divisions in local communities.

Ms. Alma Masic emphasized her satisfaction since civil society actors in BiH have shown a willingness to take common decisive steps for strategic actions along with their civil society colleagues in BiH in order to become a key player in the process of democratization of the country.

Speaking about the findings and impressions of the forum, Mr. Pandzic, said that the Forum certainly achieved one of its goals, and that is putting the cooperation of NGOs from the local communities in the foreground.

‘’Forum participants agreed that this is only the first in a series of steps, which should empower civil society in BiH that the country would become a truly democratic country that protects human rights of all its citizens’’, added Ms. Masic.

In addition to discussions and working groups, the Forum provided a show of documentary films on human rights: "Two schools under one roof", ‘’Queer Festival in Sarajevo’’, and the premiere of "Do not tell me about peace and love", which is directed by Cazim Dervisevic.

The forum was a gathering of civil society actors in BiH, who come from a variety of initiatives in the Balkan countries and the European Union, and represented a first step in a long process of ”building a common civil society in BiH’’. 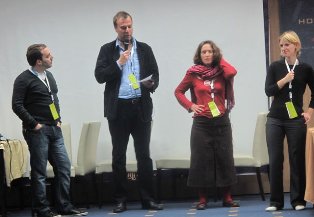 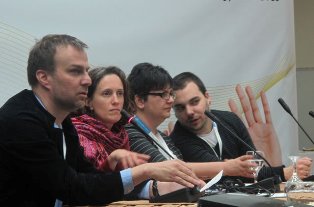 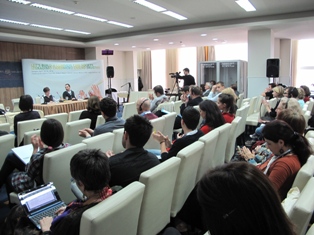 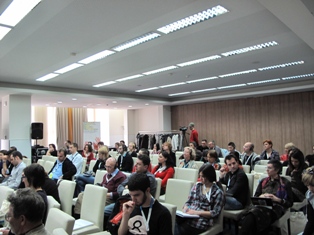 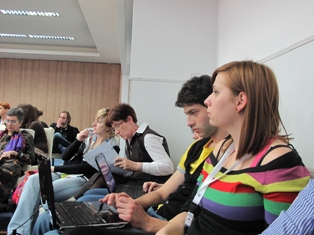