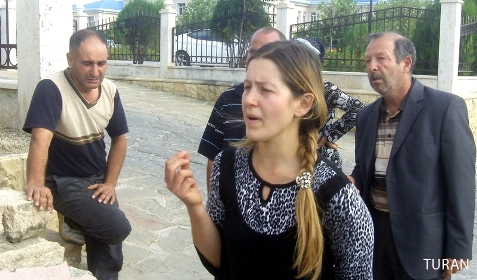 Impunity for torture in Nakhchivan

The torture murder by the security agents in Nakhchivan, an Azerbaijani enclave, remains unsolved, even though the family members of the murdered Turac Zeynalov presented video footages confirming the tortures.

On the 24th of August, Turac Zeynalov, a resident of Nakhchivan, was summoned to the Ministry of National Security on the charges related with cooperation with Iranian intelligence services. He never returned.

The day after, he was shown to his close relatives with a bag on his head. The Ministry officials admitted that they had slapped Zeynalov "once or twice to teach him a lesson”, according to Radio Free Europe/Radio Liberty.

However, Zeynalov had been so badly beaten that he was not able to move.

FORCED TO WRITE STATEMENT
Next day, Zeynalov, born in 1980, was found dead at the premise of Ministry of National Security of Nakhchivan, a region notorious for its human rights abuses.

The Ministry claimed that Zeynalov died from the disease of cancer, not as a consequence of torture, as claimed by his family.

Zeynalov’s family was intimidated by the local authorities and security agents not to speak on the death of their son to media and international organizations.

According to the Zeynalov’s family members, they were forced to write a statement saying they had no complaints about the death and about the local authorities.

On the 30th of November, Zeynalov’s father and wife came to capital Baku, where they presented the video footages illustrating slain Zeynalov’s body bearing wounds on the legs and neck.

The footages were shot shortly after the dead body of Zeynalov was returned to his family by the local authorities.

The footages are available on Youtube – external link here

In an interview to RFE/RL Azadliq radio, Zeynalov’s widow said:
“His [Turac Zeynalov’s] skull was broken and there were cuts in his throat. When we asked about this, we were told he had a tumour in throat and they had taken it out. Actually, they hung him, strangled him, and then they wanted to cover up the signs. His body contained bruises. They tortured him with electricity."

Aftermath the spreading of footages in social media outlets, an official from Nakhchivan’s local government threatened the family and said:

“You will be punished before the law for speaking to the media and presenting the video.”

TRIALS ARE CLOSED TO PUBLIC ACCESS
Witness reports suggest that torture and ill-treatment are extensively used in all prisons and detention centres in Nakhchivan. There has never been any independent local NGO representatives accessing and monitoring the prison systems in Nakhchivan.

Many trials are closed to public access, while the police continue to harass detainees and threaten witnesses and detainees’ families are prevented from making torture allegations public.

Torture and ill-treatment are widespread in places of detention and prisons of Nakhchivan, where widespread techniques are used by the authorities to extract confessions from suspects.

With the absence of free media, there is almost no access to information about torture allegations. While interviewing Zeynalov’s relatives, journalists were intimidated by the employees of the Ministry of National Security (MNS), who tried to seize their cameras and microphones and expelled Yafez Hasanov, RFERL journalist from Nakhchivan.

“After eliminating almost all the sources of news and information, Nakhchivan’s security services are carrying out intolerable human rights abuses with complete impunity,” Reporters Without Borders said in a statement on the murder of Zeynalov.

Legal remedies remain ineffective locally, as the judiciary effectively depends on the executive and always issue verdicts favouring the stance of the authorities.

No proper investigation has been held, even though Azerbaijan’s Human Rights Ombudsman Elmira Suleymanova has asked the Prosecutor-General and National Security Minister to investigate Zeynalov’s death, and to assure that the responsible for Zeynalov’s death brought to justice.

Authorities made no comment on the video footages and about human rights violations in Nakhchivan.