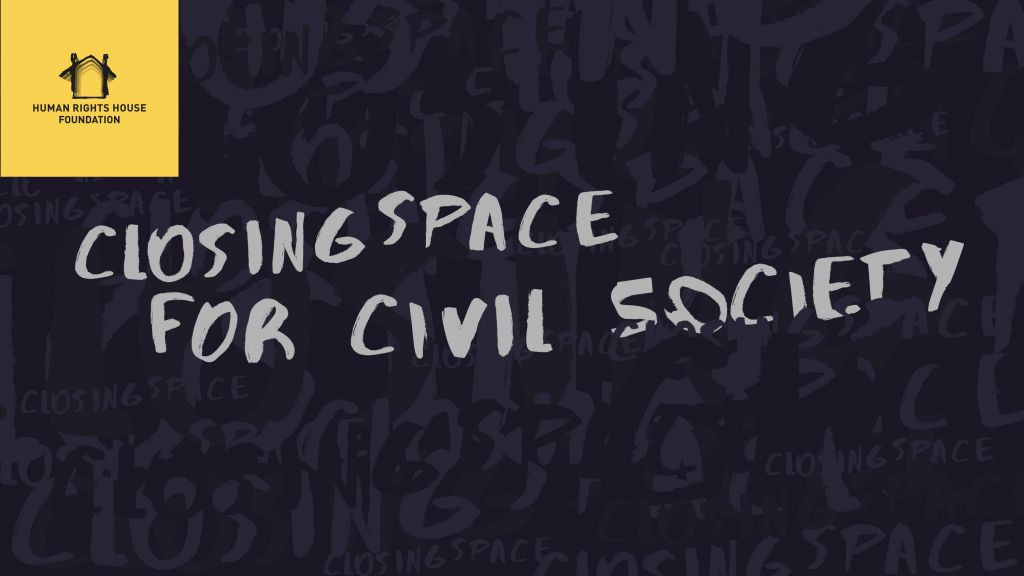 At the ongoing session of the United Nations highest human rights body, states and non-governmental organisations raised the shrinking space for civil society as an issue in need of the UN’s attention. Human Rights House Foundation drew particular attention to the situation in Azerbaijan, Belarus, and the Russian Federation.

In its statement at the Human Rights Council, Human Rights House Foundation (HRHF) asserted that the space for civil society to participate in public life has shrunk drastically in countries across Europe, and that many States have adopted legislation that limits the ability of non-governmental organisations (NGOs) to work or receive funding.

Florian Irminger, Head of Advocacy at HRHF, commented, “These states de facto criminalise the right to be a human rights defender, the rights to assemble and associate, the right to freely express, and the right to participate in public life, which are the pillars of a safe and enabling environment for civil society and the cornerstones of democracy.”

Irminger continued: “This restricted space for civil society has been particularly evident during and in the recent election period in Belarus and Russia, as well as in the run-up to the referendum in Azerbaijan. This is part of a worrying trend in which authorities increase their crackdown on activists and human rights defenders during electoral periods, when society is most expecting, and needs, a public debate.”

Slovakia, on behalf of the European Union, commented on the situation in Russia at the Human Rights Council: “The EU remains concerned about the ongoing implementation of the laws on ‘foreign agents’ and ‘undesirable organisations’ and the ever increasing limitations on the freedoms of assembly and expression online and offline in the Russian Federation leading to a shrinking space for independent civil society. The EU condemns the attacks against the opposition, journalists as well as human rights defenders.”

In Azerbaijan, amid what the UN Special Rapporteur on Human Rights Defenders recently described as “the worst situation [for civil society] since the independence of the country,” the authorities carried out waves of arrests in the run-up to the referendum, which is to be held on 26 September. In August, they arrested leading journalists and political activists and several human right defenders for criticising the referendum and participating in peaceful protests and actions. In September, they arrested 40 activists ahead of a planned protest on 17 September. In its statement at the Human Rights Council, HRHF called upon Azerbaijan to “end its repression against civil society and immediately and unconditionally release and rehabilitate the civil and political rights of all prisoners of conscience” and to “take concrete steps to prevent and stop the use of legislation to unduly hinder the ability of human rights defenders, journalists and activists to exercise their work.”

In Belarus, the situation has not improved for civil society. Following parliamentary elections held on 11 September. The UN Special Rapporteur on Belarus Miklós Haraszti, who analysed the electoral system in Belarus in a report to the UN General Assembly in October 2013, called the electoral process “lipstick on the face of violations” and further stated that “citizens’ right to a free and fair election continued to be abused in the grip of entrenched repressive laws and institutions, just as in previous parliamentary or presidential elections.” Noting that for the first time in 20 years the opposition can claim one seat in Parliament, while another seat went to an independent candidate, Miklós Haraszti further commented that “the election of the opposition candidate exhibited the fully guided character of the electoral process.”

Observers say that the election did not meet a number of key international standards for free and fair elections, which is a view shared by Miklós Haraszti, whose 2013 recommendations were never implemented by the Belarusian government: “It is regrettable that Belarus did not take into account real changes towards equal media access, verifiable turnout, honest vote count, and a pluralistic parliament,” he concluded.

The Special Rapporteur on the Rights to Freedom of Association and Peaceful Assembly, Maina Kiai, stated that during an electoral cycle – be it elections or a referendum – “States should make greater efforts to facilitate and protect the exercise of these core rights, which should be enjoyed by everyone, especially by members of groups at risk. In effect, genuine elections cannot be achieved if the rights to freedoms of peaceful assembly and of association are curtailed.”

Irminger concluded: “In this context, the elections in Belarus and in Russia, as well as the upcoming referendum in Azerbaijan, are deeply flawed, as they took place or will take place without a real public debate, and without the essential input of civil society and independent media to the democratic process. Governments in these countries have in fact done more to limit the space for a meaningful public dialogue during the electoral cycle, to control it for their own best interests.”