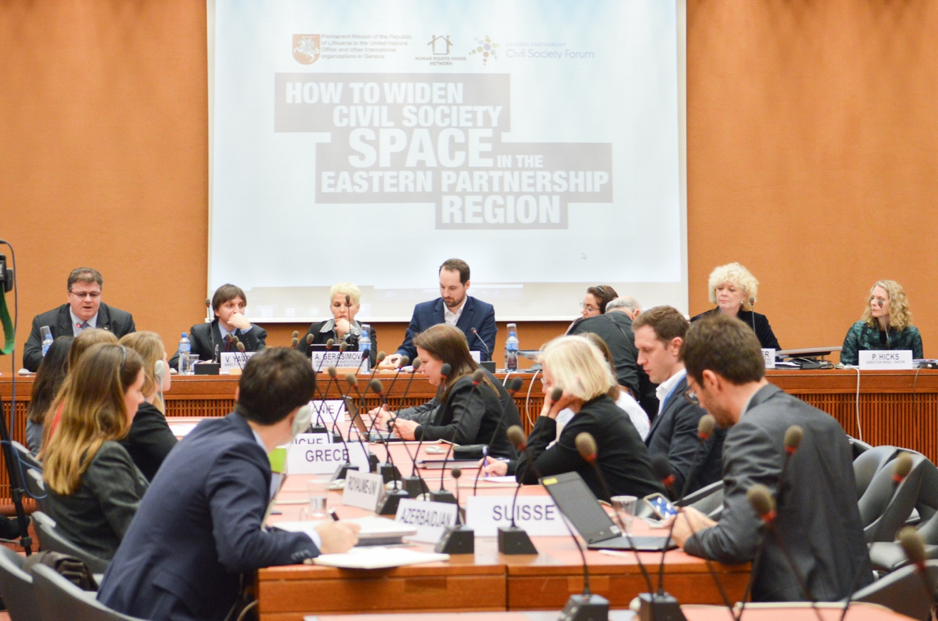 How to widen civil society space in the Eastern Partnership Region

The answer: to get authorities to understand and acknowledge the value of engaging positively with a strong, independent civil society. This was the overriding message delivered by high-level speakers at a side event hosted by the Permanent Mission of Lithuania and by the Human Rights House Network, held on 1 March 2016 at the 31st session of the Human Rights Council in Geneva.

Maria Leissner, Secretary General of the Community of Democracies, stated: “Civil society is here because it wants to improve the world. That is what civil society activists work on.” She then explained the need for authorities to go beyond a “neutral” approach in which they do not imprison civil society actors or restrict the activities of NGOs, to a positive approach that recognises the value of civil society and develops a dialog with civil society organisations. “Civil society is improving our countries; it is an absolutely necessary requirement,” she concluded.

Linas Antanas Linkevicius, Minister of Foreign Affairs of Lithuania, supported the value of a strong, independent civil society, stating: “Governments have to understand that it is important to have a strong civil society, including even those organisations that criticise.” He then called on ministries to empower the work of NGOs, and expressed the need to protect everyone exposed to risk for their work. 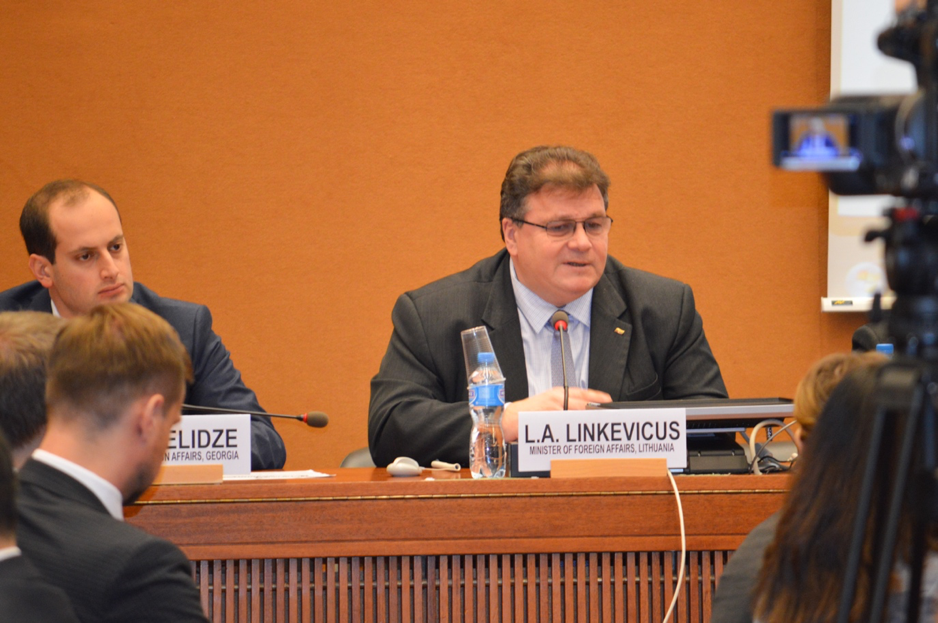 Linas Antanas Linkevicius, speaking at the side event.

In terms of concrete benefits of civil society, Peggy Hicks, Director of Research and Right to Development Division, Office of the High Commissioner for Human Rights, put forward reasons why widening the space for civil society should be a priority, asserting that civil society and activism engage stakeholders, mobilise people, increase the credibility of the national human rights system, and are good for business.

Speaking from the perspective of civil society, Anna Gerasimova, Director of The Barys Zvozskau, Belarusian Human Rights House, focused on the need to advance human rights education and the training of human rights lawyers to protect human rights defenders in Eastern countries. On successes, she referenced the 152 complaints submitted by civil society to the Human Rights Committee between 2007 and 2015, of which only 11 were found inadmissible.

Volodymyr Yavorskyi, Centre for Civil Liberties, Member of the Human Rights House Kyiv, indicated that it is impossible to talk about cooperation without civil society first enjoying the fundamental freedoms of association and expression. He spoke of strong cooperation but also confrontation between authorities and civil society in Ukraine: “Governments can’t implement activity properly without civil society.” However, he suggested that there is a problem that many states do not cooperate as they do not recognise civil society as an independent representative of the will of the people: “Civil society and the population are the same, despite some governments wanting to separate them.”

Ofelya Zalyan, Helsinki Citizens’ Assembly- Vanadzor, member of the Eastern Partnership Civil Society forum and of the Human Rights House Yerevan, spoke of the challenges of being a human rights defender in Armenia, indicating that opposition to the work of human rights defenders comes from sections of society as well as from the authorities, while expressing the importance of civil society in decision-making.

The side event comes amid growing restrictions on the activities of NGOs around the world and increasing threats to those that work within them. Repeating the point made by Maria Leissner, civil society actors are a positive force who want to improve the world, and they should be valued and treated as such.

HRHN will continue to raise the important role of civil society and the need to support and empower civil society actors throughout the 31 session of the Human Rights Council. Among other activities, HRHN will intervene at the interactive debates with the Special Rapporteurs on the situation of human rights defenders (4 March), and with the Special Rapporteur on the rights to peaceful assembly and association (9 March). HRHN also expects to take part in the debate on the adoption of the Universal Periodic Review report of Georgia scheduled for 17 March, and in the debate on the situation on Ukraine scheduled for 22 March 2016.