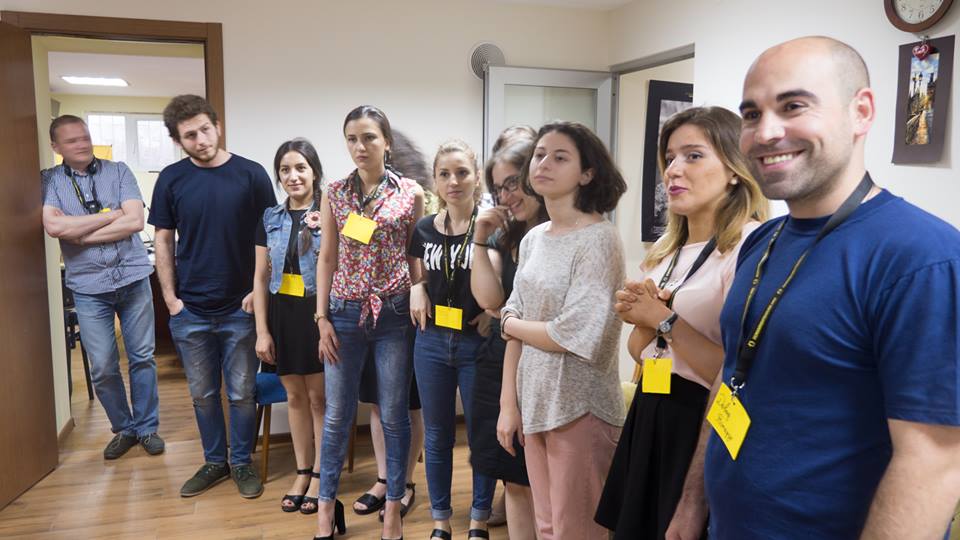 Is it a mission or profession to be a human rights defender? Do women have the same rights as men in Georgia and how far should journalists go in protecting their sources? Three young Georgians explore these topics.

We proudly present the three winners of Human Rights House Tbilisi’s essay competition, which was part of the summer school that they attended along with 13 other students in June.

Protecting journalistic sources: Guardian of the democratic society on the brink of breaking the law?

He begins by quoting Arthur Schopenhauer, Parerga and Paralipomena, 1851: “Thus it is that all journalists are, in the very nature of their calling, alarmists; and this is their way of giving interest to what they write. Herein they are like little dogs; if anything stirs, they immediately set up a shrill bark.”

“The protection of journalistic sources is essential for free media. Revealing such sources will raise doubts towards journalists and have a chilling effect on their future activities. They will not be able to obtain reliable information and will gradually lose their purpose of existence – providing the public with valuable information and performing the role of ‘alarmist.’

This right is not absolute in itself. There are some limitations, but every case should be examined individually, thoroughly and with utmost scrutiny. Is it possible to draw the perfect line between protection of source on the one hand and the rights of the others on the other hand? We have seen that prescription by law, having legitimate aim, protecting authority of judiciary and secrecy of information does not suffice to overweigh public interest and to consider something as necessary in democratic society. The notion of necessity belongs to the category which has to be assessed.

The one thing that we all may agree about is that rights granted to the journalists and ability to protect source of information should be as broad as possible. Otherwise, we will push journalists towards edges and transform them from wild public watchdogs to tamed domestic puppies.”

Salome Tskhakaia, graduate of Caucasus International University, states that politics are one of the main and essential indicators of Georgia’s democratic development, yet this has been challenging for the country. She assesses the constitutional protections for women and for equality, and goes deeper into issues such as domestic violence and early marriage.

“Is it possible to prevent violence against women? Absolutely, yes. But legislation alone is not enough; it must be promoted and enforced. Support services must be available to women escaping violence, including access to shelters. The key to end violence against women and girls is in changing traditional gender roles, power balance, and the attitudes and beliefs that society and families embed in women and girls from an early age, and which allow violence to continue.

Of women in Georgia, 82 percent do not know that Georgian legislation protects their rights, and this is the reason for women’s powerlessness. To establish equality between men and women, in all aspects of life, it is necessary to redevelop the value and dignity of women and widely implement their human rights.

It is important to realise that we have problems and we are doing nothing for these women. Society has a big role, but unfortunately we do not care enough about it. We must think about it. What are we doing when we see an abuser husband? Because it is dramatic that women’s rights are violated mostly in families – a place where a person must feel herself the most protected.

In the previous year, 2016, 17 women were killed as a result of domestic violence. Every abuser should recognize that there is no reason to deny women’s rights at any level; they are also a part of society and should be treated as equals. They have the right to decide whether or not they will bear children, have an education, purchase a property, and vote. Discrimination of any sort based on gender is backward and cowardly thinking and is strictly prohibited. So, we must together realise that WOMEN’S RIGHTS ARE HUMANS RIGHTS.”

“Defending human rights comes automatically without realising it… It is unbelievable to fulfill the tasks and do your job, defend human rights, without having a profession, which is an actual weapon – the knowledge needed for completion of your mission. As for me, profession and mission are inseparable, especially in the case of human rights defenders. I believe that a combination is necessary to fight against the injustice Game.

The participants, trainers, and organisers reflect on the summer school in a short documentary film, including their motivation and expectations, and the benefits of practical training led by human rights defenders and civil society.

Winners of the essay competition

Giorgi Bregvadze is 21 years old. He graduated from Tbilisi State University in 2017 with a first class honours degree in Law. In 2015 he was an intern at Migriauli & partners law firm. In 2016 worked as an lawyer at Rustavi transportation company. He is interested in intellectual property and plans to move forward and obtain masters degree in this direction abroad. He also plans to create his own organisation in the fall of 2017.

Salome Tskhakaia is 21 years old. In 2017 she graduated from Caucasus International University with a bachelors degree in law. In 2013 she worked as a paralegal in a company of Sumbulashvili & Partners, Tbilisi (Georgia). From 2016-2017 she was a tutor and trainer in Cambridge Center conducting trainings on legal English and legal writing. She plans to obtain a masters degree in Public Governance in Poland.

Tamari Ortoidze is 21 years old. In 2017 she graduated from Tbilisi State University with a bachelors degree in Law. Through years she volunteered for NGO “Woman, Child and Society”, SPOSA Bratislava, also has worked OSCE Office for Democratic Institutions and Human Rights (ODIHR), Ministry of Justice of Georgia, Phoenix Trading, Tsu Law Review. Tamar is a member of in ELSA Tbilisi. After participating in summer school, Tamar joined Tbilisi Human Rights House and its member organisation “The Article 42 of Constitution” as an intern. She is interested in international law and human rights and plans to enroll in a masters degree in this direction.