Expelled from university for civic activism

Belarusian State University political science program alumni consider the expulsion of a Young Front press-secretary Tatsiana Shaputska (on picture right) “a dirty stain on the image of Law Faculty of BSU. The student was thrown out after participation in the Eastern Partnership forum outside Belarus” without asking a required permission to leave the country from the deans.

A group of alumni from the BSU political science program, among them representatives of Vilnius HRH partner-organisations – Yury Chavusau, Assembly of Democratic NGOs, Tatsiana Chulitskaya, EHU, and others – have signed a petition in support of Ms Shaputska.

Alumni were bewildered by department administration’s actions violating a principle of “scholarly pluralism,” which resulted in students’ persecutions for civic activism. “Prior to this moment this principle was upheld and there was no place for ‘witch hunting’ students. However, this particular example with the expulsion of Tatsiana Shaputska endangers to cancel out all the BSU political science school achievements and could leave a dirty stain on the image of Law Faculty of BSU.”

According to the petition signatories BSU should be proud of its publicly active students: “We call upon our alma mater to remember what we were taught within its walls. We are convinced that expelling students for their civic activism contradicts to underlying principles of modern university, to BSU traditions, and it could well jeopardize the BSU status as a respectable educational institution.” 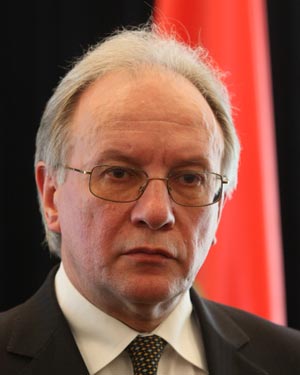 The Foreign Minister of Belarus Siarhei Martynau (right) said that “not the government, but the university expels students”.

He underlined that the reason for expulsion was “the absence rate”.

Tatsiana Shaputska called this statement “an utter lie.” “Eihter Mr Martynau lied deliberately or he had bad informants. He said that the university gave him information about my attendance.

The BSU administration made no comments about my absences. Martynau had to find a minimal justification for the EU foreign ministers. That was a more-less acceptable exit strategy for him.” 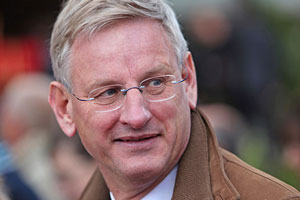 In response to Mr Martynau’s awkward explanation Carl Bildt noted that “representatives of law-enforcing agencies had come in contact with the administration of the university”. “They certainly might have asked about her absence rate, but it does not come within their duties usually”, the Swedish minister stated ironically.

Further, Mr Bildt stated that it would be “absolutely unacceptable” if the expulsion was connected with Shaputska’s participation in the Civil Society Forum of the Eastern Partnership in Brussels on 16-17 November.

One of the best in her class
A Young Front press-secretary Tatsiana Shaputska was expelled from the Law Faculty of the Belarusian State University on 3 December. She was a secong year political science student.

“I was invited to the dean’s office and demonstrated an order on my expulsion signed by the BSU rector. However no reasons were explained to me,” Ms Shaputska shared.

Most probably she was expelled for participation in the Civil Society Forum in Brussels this November. Tatsiana travelled outside the country without asking a required permission from the deans. In 2005 on the exactly same pretext Tatsiana Khoma was thrown out from the Belarusian State Economic University.

Shaputska was one of the best students with an average grade of 8.5. She had only one week left until the semester finals.

Tatsiana does not leave the hope to renew her studies at BSU, through courts if necessary. Her peers have already started collecting signatures for her reinstatement.