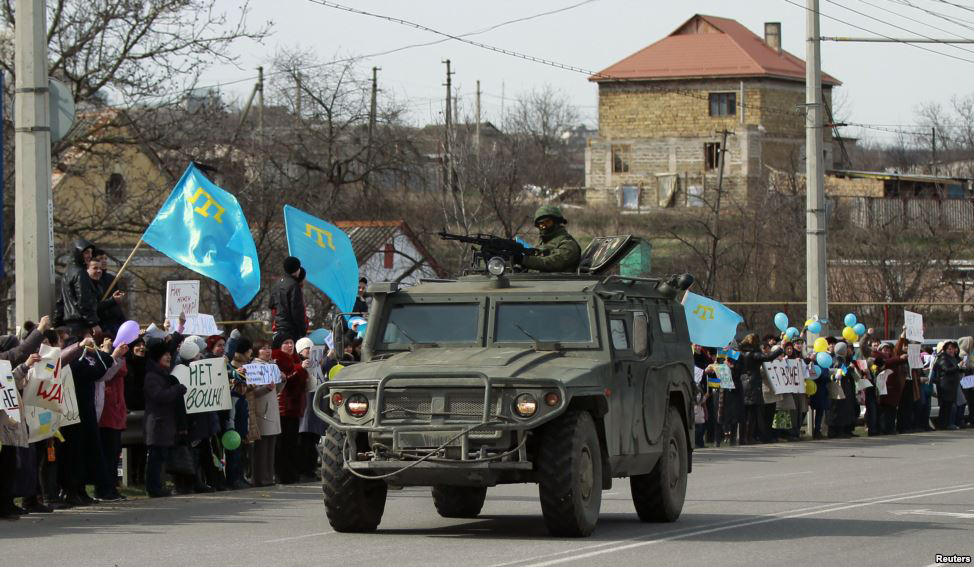 On 12 May 2016, the EU Parliament adopted a resolution on the Crimean Tatars. HRHN welcomes this resolution, and calls on Russia, as well as Ukraine and the international community, to address the deteriorating human rights situation in Crimea.

Maria Tomak, Center for Civil Liberties and coordinator of the LetMyPeopleGo campaign, and partner in HRHN’s advocacy on Crimea, welcomed the resolution’s focus on Crimean Tatars, as well as its support for political prisoners:

“The Crimean Tatars face a real threat of mass Soviet-style repression. We welcome the European Parliament’s adoption of this resolution dedicated to Crimean Tatars and the human rights violations they face – especially now, after the Medjlis has been banned.”

The resolution “strongly condemns the decision of the so-called Supreme Court of Crimea to ban the Mejlis of the Crimean Tatar People… [and] stresses the importance of this democratically elected decision-making body representing the Crimean Tatar people.”

Tomak continued: “It is important that the resolution addresses the imprisonment of political prisoners, including those implicated in the so-called ‘Case of February 26’ [in which Russian investigators accuse Crimean Tatars of rioting in front of the Crimean parliament], as well as Oleg Senstov, Olexandr Kolchenko, and others.

“It is also important to mention other political prisoners that figure in ‘Sentsov’s case’: Olexiy Chirniy and especially photographer Gennadiy Afanasiev, who is subjected to constant pressure in the colony after his refusal to support the prosecutor,” Tomak asserted.

Tetiana Pechonchyk, Head of the Human Rights Information Centre, and partner in HRHN’s advocacy on Crimea, urged further economic sanctions against Russia and against persons responsible for human rights violations:

“The EU must maintain and strengthen economic sanctions against Russia, which continues to brutally violate human rights in Crimea with impunity.”

The resolution “expresses its strong commitment to the policy of non-recognition of the illegal annexation of Crimea and to the sanctions imposed in the aftermath thereof… and calls for consideration to be given to extending the list of people targeted by EU sanctions in relation to the banning of the Mejlis.”

Pechonchyk continued: “The EU must also impose personal sanctions against all individuals connected to the mass repression of Crimean Tatar people, including against those who bear political responsibility.”

Tomak added to this call: “These persons should be added to the ‘Savchenko list,’ which seeks to establish personal sanctions against everyone who has violated the human rights of illegally detained Ukrainian citizens.”

“The adoption of the resolution coincides with new arrests, new criminal cases against Crimean Tatars, and mass searches in their places in Crimea. This underlines the need for sanctions to address the deplorable situation on the occupied peninsular,” Tomak concluded. 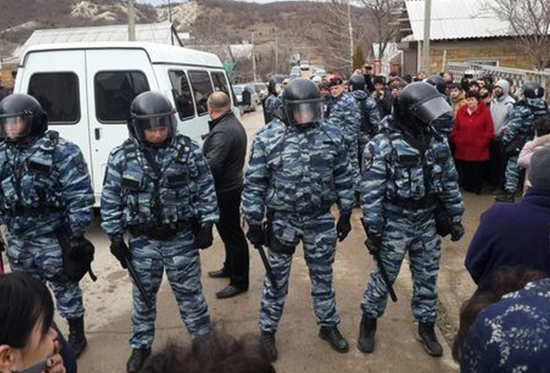 Russian military conducting searches in the Kholmovka village on February 11, 2016

“We welcome the resolution’s recommendations on easing access for international organisations, human rights organisations, and independent journalists to monitor the human rights situation in Crimea,” commented Florian Irminger, Head of Advocacy at Human Rights House Network. “We reiterate our call for Ukraine to facilitate access to Crimea, including by requiring notification rather than authorisation for travel to the region.”

“We also call on the international community to request that Russia allows unhindered access to Crimea. Russia should allow the operation of independent non-governmental organisations and media outlets, and lift travel bans or threats of arrest levied against private citizens, particularly Crimean Tatar leaders. Further, we support the resolution’s recommendation for the EU to increase support for human rights organisations working on behalf of Crimea,” continued Irminger. 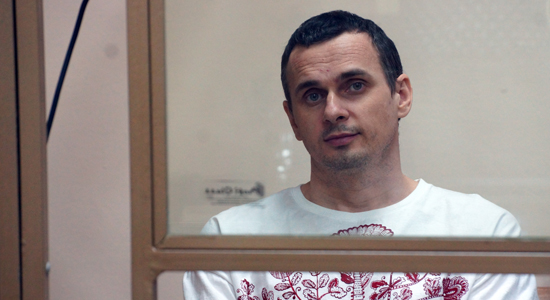 Oleg Sentsov was sentenced by the Russian Federation to 20 years in jail in August 2015. He is one of many political prisoners from Crimea.

The resolution urges the Russian Federation to “end the politically motivated prosecution of dissidents and civic activists,” and to “protect citizens from arbitrary judicial or administrative measures and rulings.” The resolution also “condemns the severe restrictions on the freedoms of expression, association, and peaceful assembly.”

“HRHN calls on international organisations to review the cases of people arrested in Crimea and brought to courts in the Russian Federation, and to demand that these people are returned to Ukraine in order to face a Ukrainian court,” asserted Irminger. “We also urge the international community to demand accountability for human rights violations in Crimea, through the available international human rights mechanisms.”

HRHN advocates for the international community, Ukraine, and Russia to address the human rights situation in Crimea, and has outlined its position and recommendations in the March 2016 policy brief Putting a Stop to Impunity: Human Rights Violations in Crimea, developed in cooperation with Freedom House.

HRHN also raised concerns over human rights violations in Crimea at the UN in a statement at the 31st session of the Human Rights Council in March 2016.

HRHN members in Ukraine have documented violations of international law in Crimea between February 2014 and February 2016, in the publication The Peninsula of Fear: Chronicle of Occupation and Violation of Human Rights in Crimea.

Resolution on the Crimean Tatars

The EU parliament discussed and adopted the resolution on the Crimean Tatars on 12 May 2016 as part of its monthly discussion and adoption of resolutions on three urgent human rights topics. The other two resolutions addressed the human rights situations in The Gambia and in Djibouti.