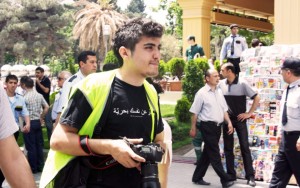 Decision is final: Mehman Huseynov not allowed to travel

-Not allowing Mehman Huseynov to come to Oslo to receive the Press Prize Award is an example of how the Azerbaijani authorities repress free speech and human rights defenders’ work in the country, says Maria Dahle, director of Human Rights House Foundation.

However, today the Azerbaijani authorities made the final decision to uphold the travel ban. – It is with great disappointment that we recieved the news that Mehman Huseynov will not be able to come to Oslo, says Bente Roalsvig, project director of Fritt Ord Foundation (lenke). -Luckily his mother; Frangiza Huseynova, will be here to recieve the prize on behalf of Mehman.

In the aftermath of 2012 Eurovision in Baku, the authorities accused Mehman Huseynov of hooliganism due to his legitimate work as a photojournalist. The case is pending, and if charged, Mehman Huseynov might face up to five years of imprisonment. – We consider the charges as retaliation against his work, and urge the Azerbaijani authorities to drop them unconditionally and immediately, emphasizes Dahle.