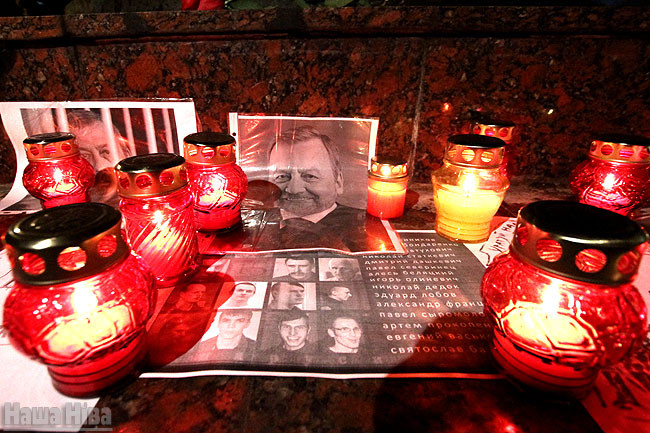 December 19 – year after the elections

On 19 December 2011, the action in memory of the violent crackdown on peaceful protest after presidential elections that happened a year ago was held in Minsk. This year, the rally has again ended with brutal detentions and arrests.

A year ago, on 19 December 2010, Belarus held presidential elections, which were accompanied by numerous violations of election laws and did not meet international standards.

In the evening, thousands of people gathered for a peaceful protest against the election fraud. The demonstration was brutally dispersed, and more than 700 people, including presidential candidates, were beaten up, arrested or fined.

That day, an unprecedented wave of politically motivated repression began in Belarus, manifested in massive searches and seizure of equipment, prosecutions and long prison terms for those who dared to protest.

SOCIAL NETWORKS
This year, in the evening of 19 December, people decided to walk along the path of last year’s rally, and light candles at the Independence Square, where the protest was broken up.

Several calls "to walk the exact path at exact time as a year ago," e.g. at 8 PM were spread in social networks .People were referring to the private, personal protest without slogans and posters.  None of the opposition parties or liders took the initiative to organize a mass rally. Detentions began already in the morning. 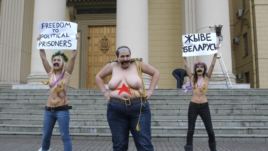 Femen-protesters.During the protest rally organised by FEMEN activists, at around 11am, security of the KGB building in Minsk, detained journalist Tatsiana Haurylchyk, photographer Yulia Darashkevich and Australian camerawoman Kitty Green.

At the beginning, the protesters managed to escape, but in the evening the contact with them was lost. In the evening of 20 December, it was reported that plain cloth men beat up the activists of FEMEN, cut their hair and confiscated their documents.

FEMEN movement Anna Gutsol said: "They are alive but not healthy and very startled, yesterday they were seized by KGB men, who drove them through the night in the car, then took them to the woods."
"They were beaten up and doused with oil, they were threatened with being set on fire and their hair was hacked off with a knife. The men filmed everything on a camera, and left them in the woods.They got to the village Biaki of Yelsk district, Homel region just now, they are beaten up and their papers are gone."

EX-CANDIDATE DETAINED
At about 4 pm, the ex-presidential candidate Vital Rymasheuski was detained near his house in the Sukharava. Three unknown perso

Vital Rymasheuskins attacked him with no explanations at the front door of his house, threw him into a van and took him to the Frunze district police station.

He noted that in the police station he was chained to the bench. He was kept in a such position for about four hours.

"Everything happened the same way as on 19 December last year. They detained me in the same way, did not introduce themselves again and threw me into the same van. The only difference is that it was not that brutal – now they did not hit me on the head. Nothing else has changed. Thus the authorities show that a person can be arrested at any moment. "

DETAINED 50 PEOPLE
Detentions on a larger scale that took place in the evening were extremely brutal – people were dragged up the steps, hit on their heads. SWAT officers pulled 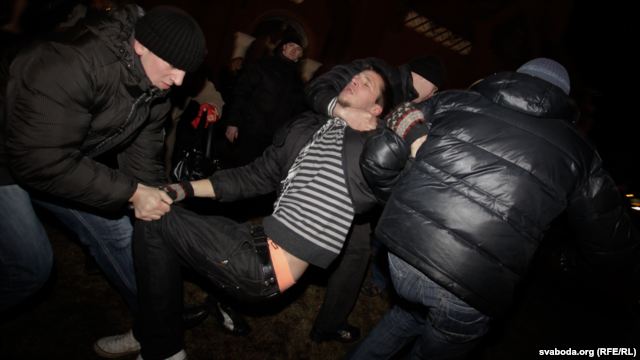 According to human rights defenders, in the evening of 19 December, the police detained around 50 people who came to the city centre to light candles as a sign of solidarity with political prisoners who were imprisoned after last year’s presidential elections. Most massive arrests took place at the Independence Square, the October Square and Yakub Kolas Square.

All of them were convicted for participating in unsanctioned mass event (st.23.34 Administrative Code). Only three minors were released. One girl was taken by the ambulance.

Minsk police department reported that 46 most active participants of the protest were taken to the police departments. After the identification 14 protesters have been released, and reports were drawn up for 32 others under Articles 9.04 (Failure to bear and raise children), 23.34 (Violation of the order of organization of mass actions or picketing) and 17.1 (Disorderly conduct) of the Code of Administrative Offences ".

OTHER REACTIONS ON HUMAN RIGHTS IN BELARUS

EU High Representative Catherine Ashton and U.S. Secretary of State Hillary Clinton issued a joint statement on human rights in Belarus on the anniversary of the brutal dispersal of the protest of 19 December, 2010.

Over the past 12 months, the Belarusian authorities have imprisoned peaceful demonstrators, suppressed non-violent protests, and worked to silence independent voices. There have also been credible reports of degrading and inhumane treatment of political prisoners.
A number of them have been set free, but we reiterate our call for all political prisoners to be immediately released and rehabilitated, including presidential candidates Andrei Sannikau and Mikalai Statkevich, and human rights defender Ales Byalyatski," – the statement says.

Also, 19 international NGOs issued a joint letter calling on Lukashenko to "release all political prisoners in Belarus immediately and unconditionally and to stop the persecution,harassment and intimidation of dissidents immediately."

In addition, the authors of the letter demanded to rehabilitate all the accused for political reasons, not to impede the activities of political parties and NGOs and to introduce a moratorium on the death penalty.

"One year after the 2010 presidential elections Belarus finds itself in the most alarming human rights crisis since the country became an independent state 20 years ago. The situation with human rights in the country has never been worse and continues to deteriorate., "- the joint statement says.