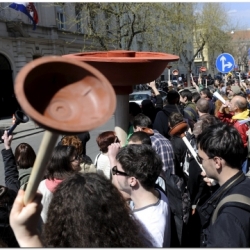 Activists of Association Right to the City and Green Action submitted to USKOK (Office for the Suppression of Corruption and Organized Crime), criminal charges against Mayor of Zagreb, Milan Bandic, charging him for abuse of office and authority, and for concluding the contract with Hoto group for the project in Varsavska street, which is harmful for the city of Zagreb. A submission was accompanied by a protest of almost 200 activists and citizens in front of USKOK building in Gajeva street, Zagreb.

Teodor Celakoski, the Right to the City, told Croatian reporters that the criminal charges against Bandic, accuse him of abuse of the position and powers of the mayor because he concluded damaging agreement on financing the construction of input-output ramps in Varsavska street, without a made decision of the City Council on the mentioned financial commitment of the City to Hoto group, to return its investment of 13 million Kunas for this project.

He explained that the Mayor of the City Council, Milan Bandic, undertook a contract to build the program, which has not yet passed, in the next five years in order to provide financing for already agreed infrastructure between him 8not the City Council) and Hoto group. He stressed that such a procedure is against the laws on utility services and construction, since this is not the case of renewal or new construction of communal infrastructure in Varsavska, but private investment that has nothing to do with the utility infrastructure.

Celakoski considers that ‘’the possible situation to begin with the construction in spite of proceedings pending at the Administrative Court, is a perversion. And that the people of Zagreb will therefore, from their own pockets finance 13 million-worth private investment’’. He pointed out that the submission of individual complaints against Bandic does not preclude further action by activists who are fighting to preserve the pedestrian zone in a Varsavska street, as well as it does not preclude providing to the competent Croatian authorities, new information and documentation related to, as he said, fraud on the Cvjetni Trg (Floral Square) in Zagreb.

"It is obvious that this project is a remain of the arrangement that existed at the national and local level between then Prime Minister, Ivo Sanader and still current mayor of Zagreb, Milan Bandic, in which all projects were covered vertically, and institutions of the rule of law, which everyone likes to refer to, were not able to act. This is the reason why we think that is USKOK is the right place where the situation of systemic corruption should begin to resolve, " said Celakoski. 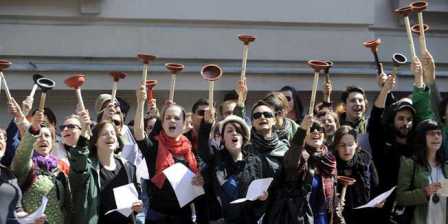 NGO activists protesting in front of USKOK building in Zagreb

In front of USKOK building in Zagreb, gathered around 200 protesters who were "armed" with plungers and by singing the verses "Zagreb is clogged city, go uncork it now",  jointly called state attorney’s office on  the prosecution of corruption and crime in the city of Zagreb.

Unlike previous protests, when people were at temperatures below zero for several hours, and were confined in cages, yesterday’s protest was in more cheerful tone, with support verses sang aloud by activists and  well-known opponents of the project, such as Ursa Raukar, Niko Gamulin and Sasa Mesic, daughter of former Croatian president, Stipe Mesic.

‘’Of course I’m singing! I came to give support to these people’’, said Mesic.

Video of the Protest:

Jutarnji.hr – video of the protester and inerview with activists;

Video and lyrics of the song ‘Zagreb te zove (Zagreb is calling you’) – uploaded by FB user, Igor Ajgour Lesar. 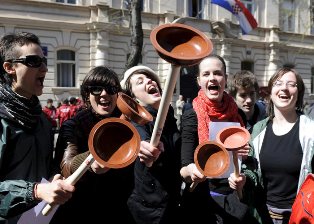 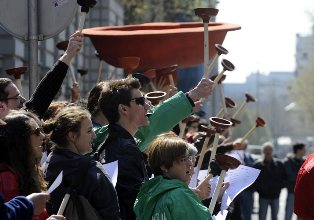 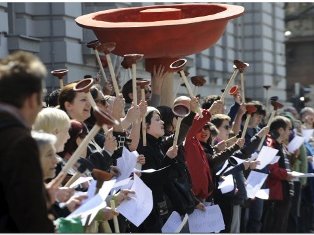