Home
/
Latest
/
Belarusians protest against the “tax on parasitism”
Articles

Belarusians protest against the “tax on parasitism”

Protests against the President’s Decree No. 3 “On the prevention of social encumbrance” were held on Sunday, 26 February in four major cities of Belarus. Now participants of the “Marches of Non-Parasites” are massively becoming subjects to the administrative violation protocols.

On 2 April 2015 the President of Belarus Alexander Lukashenko signed Decree №3 on “On the prevention of social encumbrance”. According to this document, those citizens, who did not work and “did not participate in the financing of public expenditures” for more than 183 days a year, must pay a fee of 20 basic units (about 230 euros).

In the autumn of 2016 Belarusians began to receive “letters of happiness” from the tax office with the requirement to pay fees “for parasitism” by 20 February. So, large-scale protests against the new “parasites” tax began on Sunday 19 February. Thousands of people across the country came to express their indignation at the situation. Mass rallies were held in Babrujsk, Baranavichy, Viciebsk (in the picture), Hrodna, Homel and Minsk.

It should be noted, that these protests involved not only political and civil society activists; many participants admitted that they participated in protests for the first time in their lifes. 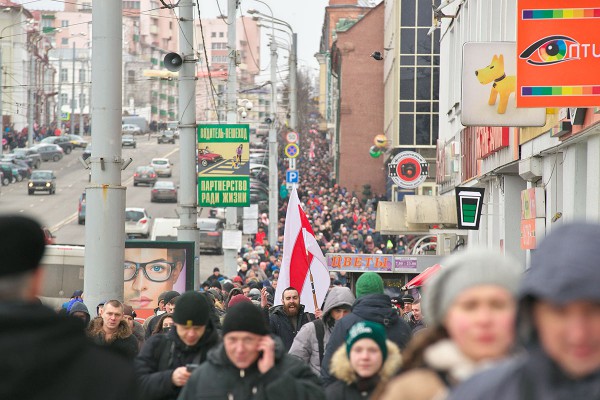 Now participants across the country are becoming subjects to the administrative violation protocols for participation in unauthorized mass events. However, more protests are already planned for March.