The funeral of Aleh Biabenin, the founder and editor of the charter97.org website, was attended by hundreds of people. The Belarusian Government has promised to invite the OSCE experts to ensure a proper investigation of the media activist’s suspicious „suicide“ on 3 September. However, anonymous threats to some of his colleagues keep appearing daily.

Among the people who came to say last farewell to Aleh Biabenin, were the first leader of the independent Belarus Stanislau Shushkevich, the chairperson of the Belarusian Association of Journalists Zhana Litvina, human rights activists Ales Bialiatski, Tatsiana Reviaka, Valery Shchukin, Aleh Vouchak, a range of political opposition leaders and activists.

All the head officers of Minsk riot police were attending the place of the funeral ceremony.

Many people who had come to pay last respects to Aleh brought white and red flowers, the colours of the national flag of Belarus. 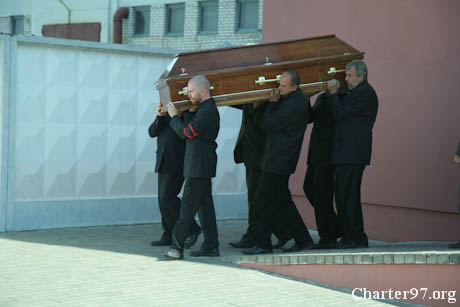 The Ministry of Foreign Affairs (MFA) of Belarus promised to invite „one or two“ foreign forensic experts to ensure impartial investigation of the death.

It has been stated by Andrei Savinykh, Press Secretary of MFA: “They could get familiar with all the papers relating to the investigation into the death of reporter Aleh Biabenin“.

Savinykh emphasized that invitation of foreign experts is unprecedented in the legal practice of Belarus and other European countries. “The reason for such a move is that we are surprised and concerned about various groundless speculations and insinuations <...> of individual representatives of international bodies,” the spokesperson of the Belarusian MFA said.

At the same time, he stressed that appropriate authorities of Belarus approached the investigation of Biabenin’s death in the most responsible manner and followed all the accepted rules of the international law.

New threats
However, many of the late journalist‘s colleagues suspect exactly the government of Belarus to stand behind the death of Biabenin, just like some other independent journalists and public figures who disappeared more than 10 years ago.

Some of Biabenin‘s colleagues who do not believe the „suicide“ version receive daily anonymous threats. 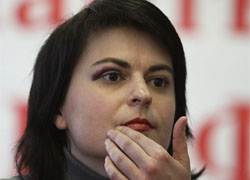 Earlier the threats appeared constantly but with some periodicity, several times per year. After Aleh’s death threats appear every day,“ – says one of the targets, Nattallia Radzina of charter97.org (left).

The threats come in a form of commentaries to her articles. They say that Biabenin was the first journalist who was killed, and the others are on the list.

„All this is only strengthening our suspicions that Biabenin was killed. The effect of these threats is reverse. One can’t intimidate us. We will continue working anyway, and the bastards who write this sooner or later will answer for all”, – Radzina stated.

BAJ: “shocked and upset”
The Belarusian Association of Journalists (BAJ) expressed its deep concern over the death of a colleague.

“Both this death and the deaths of Dzmitry Zavadski, Vieranika Charkasava, and Vasil Hrodnikau leave more questions than answers. However, the people, who start searching for the answers, jeopardize their lives at that,” – stated the BAJ on the occasion of the International Solidarity Day of Journalists on 8 September.

“The news of Aleh’s death has shocked and upset many people. 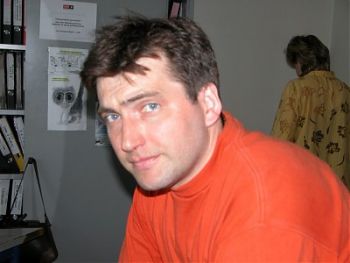 His fellow journalists cannot believe he is dead. He was a great journalist“, – said BAJ vice-president Andrei Bastunets, right, to Reporters Without Borders.

Bastunets stressed the death of Biabenin was reported everywhere: “Even the media, which usually do not react to criminal cases involving independent journalists, have reported Aleh’s death. But only the independent and opposition media have drawn attention to the doubts being expressed about the official version that it was suicide”.

International outcry
The international community and media reacted actively to the „suicide“ of Biabenin.

Mike Harris, the public affairs manager of Index on Censorship, said the death “has sent shock waves through civil society in Belarus”.

Russia’s state-controlled television – which is typically silent when its own journalists are murdered inside the Russian Federation – has reported extensively on Biabenin’s death, the Guardian reported.

The coverage reflects the severe deterioration in relations between Minsk and Moscow.

The French Le Monde noted that “The journalist’s death sends Belarus back to the gloomy epoch of disappearances in 1999-2000″.

EU High Representative for Foreign Affairs and Security Policy, Catherine Ashton, as well as Europe’s top human rights watchdog, the Organisation for Security and Cooperation in Europe (OSCE), called for an independent investigation into the murder, warning of the “chilling effect” on the Belarusian media in the run-up to the presidential elections if a proper inquiry is not held, Guardian reported.

The presidential election in Belarus is due to take place on 19 December this year. 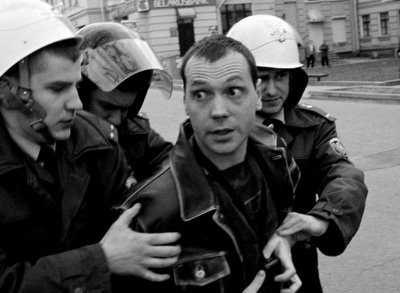 Picture: Biabenin was a frequent target of police attacks during opposition street actions in Minsk.