Home
/
Latest
/
Azerbaijan authorities have decided: “No critical voice shall be heard” 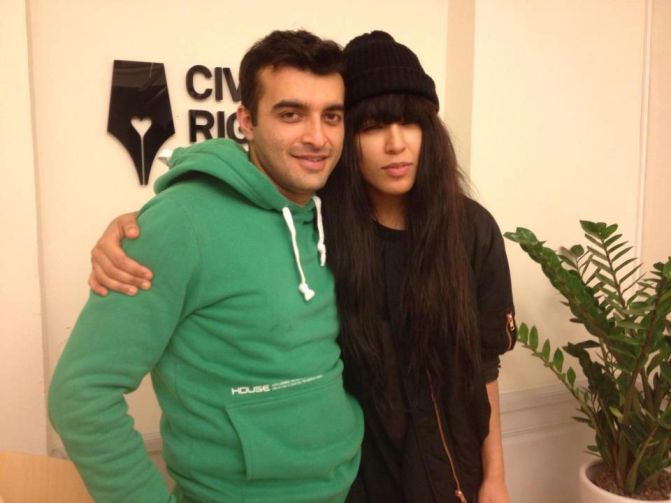 Azerbaijan authorities have decided: “No critical voice shall be heard”

Rasul Jafarov has been arrested and sentenced to 3 months of pre-trial detention, a few days after the same sentence was upheld against Leyla Yunus. In Azerbaijan, human rights defenders are criminalised and their NGOs blocked. We call upon the immediate and unconditional release of Leyla Yunus and Rasul Jafarov. Rasul Jafarov and Maria Dahle, in Baku in October 2013 (© HRHF)Following his interrogation at the Office of the Prosecutor General of the Republic of Azerbaijan, the human rights defender Rasul Jafarov was arrested on Saturday, 2 August 2014, and Leyla Yunus is also facing similar charges as those held against Rasul Jafarov.

“We know that the charges against those brave human rights defenders are politically motivated. The authorities want to silence those holding the country to its international obligations and commitments, including within the Council of Europe” said Maria Dahle, HRHF’s Executive Director.

The right to freedom of association is at the heart of the charges held against human rights defenders. Indeed, their right to work to defend human rights is facing restrictions. The refusal of registration of NGOs is one kind of restriction, such as in the case of the Election Monitoring and Democracy Studies Centre, lead by of Anar Mammadli and Bashir Suleymanli. The refusal to register grants received by NGOs in many cases, including Rasul Jafarov’s NGO, is another restriction, in contradiction with the United Nations Human Rights Council resolution 22/6 of 21 March 2013. As a result of the control the government wishes to exercise over all NGOs in the country many NGOs are under investigation and can face similar charges, depending upon their willingness to find agreements with the government, including agreements on their work and their public statements.

For over 3 years, the Human Rights House Azerbaijan had to cease all activities due to an order from the Ministry of Justice because HRHF refuses to agree with the government on our activities and findings, although the organisation is still registered. Within a few weeks, 4 human rights defenders have to be added to the list: Anar Mammadli and Bashir Suleymanli, Leyla Yunus and Rasul Jafarov. In addition to the 8 N!DA activists sentenced in May 2014, on Friday, 4 July 2014, another N!DA activist Ömar Mammadov was sentenced to five years imprisonment on charges of drug possession with the aim of selling it. Journalists such as Rauf Mirkadirov or Hilal Mammadov and political activists Ilgar Mammadov and Tofiq Yaqublu also remain on the growing list.

Charges against journalists, activists and human rights defenders have changed overtime in Azerbaijan. They used to face charges of hooliganism in the worst cases, but are now facing heavier criminal charges such as drug possession or drug abuse, weapon possession and most recently charges directly in relation to their work in the cases of Mammadli and Bashir Suleymanli, Leyla Yunus and Rasul Jafarov. This leads to higher sentences than before.

Leyla Yunus and Rasul Jafarov were both documenting cases of politically motivated detentions and were also documenting breaches in the right to fair trials in Azerbaijan. “The arrest of those two human rights defenders shows that instructions in these cases come from the highest level of government, because no critical voice shall be heard” said Maria Dahle.

Rasul Jafarov has since continuously worked to favour the implementation by the state of its obligations under international human rights law. “We remember how inspired Rasul Jafarov was by the interest shown by the members of the committees to the situation in Azerbaijan. He truly believed a difference could be made and was encouraged by those members to continue his work” recalled Maria Dahle. 64 NGOs from 13 Human Rights Houses call upon the Azerbaijani authorities, in a joint letter to President Ilham Aliyev on 5 August 2014, to immediately and unconditionally release Leyla Yunus, Arif Yunus, Rasul Jafarov, and lift all charges held against them. We see this pre-trial detention of Leyla Yunus, Arif Yunus and Rasul Jafarov as a way to silence them. We also repeat our previous call to release Anar Mammadli and Bashir Suleymanli, and join calls for the release of Hasan Huseynli.

“Mockery of democratic aspirations” in Azerbaijan

“With this latest round of attacks on the country’s civil society, Azerbaijan is making a mockery of its stated aspirations to become a modern, democratic state. I am shocked by developments that have occurred in the last several days alone – namely, the barring of human rights activist Rasul Jafarov from leaving the country and the clearly politicized charges against Leyla Yunus and her husband,” said Isabel Santos in a statement on 1 August 2014, the day before Rasul Jafarov was arrested.