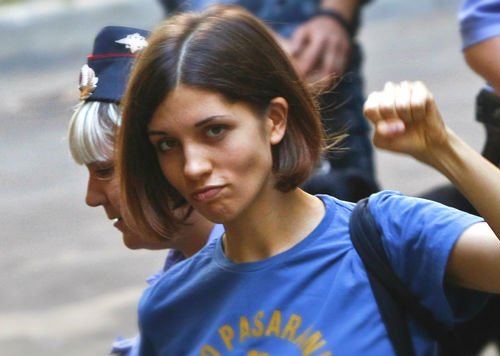 Artistic expression a crime in Russia

Three members of a feminist punk band Pussy Riot were sentenced this week to two years in prison for performing a song against President Vladimir Putin in a Moscow cathedral in February.

NGOs worldwide condemn the sentence as excessive and politically motivated and call for the immediate release of the band’s members.

On 17 August a verdict of guilty was announced in the trial against Nadezhda Tolokonnikova, Maria Alekhina and Ekaterina Samutsevich, three members of the feminist punk group Pussy Riot. The young women were charged under Article 213(2) of the Criminal Code (hooliganism). ontext of the limited opportunity for freedom of expression and freedom of assembly in Russia. In such a country where there is no free media and numerous bureaucratic obstacles for public protest, people can only rely on dramatic forms of expression to draw public attention”, told Agnes Callamard, Article 19 Executive Director.

For international observers, the case has come to symbolise Russia’s troubling record on freedom of expression and rule of law. Index on Censorship has also condemned the case as being politically motivated.

“In Putin’s Russia, free expression has become a crime. The women of Pussy Riot should be released immediately – and should never have been put through this absurd case. Artistic expression is not a crime – it’s a right, and an integral part of all free societies. The Pussy Riot verdict is the latest indication that Vladimir Putin’s Russia does not respect human rights and is sliding backwards to dictatorship”, said Kirsty Hughes, Chief Executive of Index on Censorship.

Dunja Mijatovic, the OSCE’s representative on media freedom, said the sentence was part of a “dangerous tendency to curb freedom of expression”.

Protesters holding placards and wearing Pussy Riot’s signature balaclavas rallied against the sentencing in a reported two dozen cities outside of Russia, including Barcelona, Berlin, Brussels, Copenhagen, London, Paris, Sofia, Sydney, Riga, and Tbilisi. The protest in London outside Russia’s Embassy was organised by Article 19.

Most of the protests were joined by about a dozen to as many as 200 people.

One of the New York protesters, Russian-born Olga Rychkova, told the Radio Free Europe/Radio Liberty (RFE/RL) that the government was wrong to portray the Pussy Riot case as an issue of religious intolerance rather than acknowledging the growing dissatisfaction in the country with Putin’s autocratic methods.

“The government doesn’t have the guts to admit that the women are actually being tried on political charges”, she said, and that it “tried to disguise it as hooliganism and offending religious feelings – religious hatred – which has nothing to do with who they [Pussy Riot] are, with what they had to say”. In Warsaw, about 100 people demonstrated in support of Pussy Riot. The rally took place during a visit by the Russian Orthodox leader, Patriarch Kirill, to the Polish capital. Pussy Riot has been critical of Kirill’s endorsement of Putin.

Moscow police informed RFE/RL on 18 August that more than 50 protesters detained outside the Moscow’s Khamovnichesky District Court on 17 August had all been released, including chess champion and opposition leader Garry Kasparov.

Pussy Riot, a feminist group including visual artists and musicians, was formed in October 2011. They have held a series of demonstrations and stunts as part of the protests against President Putin in the run up to his re-election in March 2012. The members of the group wear brightly coloured balaclavas to demonstrate that they represent a collective message rather than act as separate individuals.

Four members of the group performed what they call a “punk prayer” on 21 February in Moscow’s Russian Orthodox Christ the Saviour Cathedral. Dressed in brightly coloured dresses and wearing balaclavas, they sneaked into the area in front of the iconostasis – a screen that separates the sanctuary from the rest of the church – where the public is generally not supposed to enter.

They danced, jumped, and shouted some words to their song, “Virgin Mary, Cast Putin Out”. The stunt lasted about a minute before they were forcibly removed from the premises. Their actions caused no damage to church property, Human Rights Watch informs.

Footage of the girls dancing and singing inside the church was then used in a video to accompany their song, which they described as a ‘punk prayer’, posted on their website the same day. Tolokonnikova, Alekhina and Samutsevich were subsequently arrested in March and charged under Russia’s Criminal Code of 1996, Article 213(2) (hooliganism on grounds of religious hatred or enmity against a social group, planned by an organised group). The maximum penalty for hooliganism under the Criminal Code is up to seven years imprisonment, but other non-custodial punishments include heavy fines or community service.

Religious hatred or criticism of Church and Putin?

The judge ruled in favour of the prosecution’s argument that the women’s actions had been motivated by religious hatred and had caused grievous harm to Christian Orthodox believers. Prosecution witnesses included nine people who said they were profoundly offended by the stunt.

Tolokonnikova, Alekhina, and Samutsevich have claimed their actions in the Cathedral aimed at criticising the close ties between the Russian Orthodox Church and the Kremlin, as well as the way in which the two institutions reinforce each other’s conservative approaches on such issues as gender equality and rights for gay people. The group was particularly critical of the Russian Patriarch Kirill for his alleged calls on Orthodox believers to vote for Putin in the March presidential election.

On 18 August the Orthodox Church in Russia has asked for clemency to be shown to three women from the group Pussy Riot, RFE/RL informs.

NGO Statement on the Verdict Against Pussy Riot

We, the undersigned members of the Civic Solidarity Platform, call on the Russian appellate court, upon the filing of an appeal, to uphold Russia’s international obligations with regard to respect for freedom of expression and quash the criminal convictions against Nadezhda Tolokonnikova, Maria Alyokhina and Yekaterina Samutsevich of the music band Pussy Riot.

“Today three young women were condemned to a prison term of two years away from their children. Many would argue that the Pussy Riot group should have chosen a more appropriate place in which to express their opinions. Of course, freedom of expression, which includes the right to express dissenting political opinions, also requires that the right will be exercised responsibly. However, the sentence against the Pussy Riot group, as well as the length and conditions of their pre-trial detention seem harsh in relation to the nature of the offence committed in a secular state, member of the Council of Europe and party to the European Convention on Human Rights,” Thorbjørn Jagland said in a statement on 17 August 2012.

As a State Party to the European Convention on Human Rights the Russian Federation has undertaken legal obligations to uphold the rights to freedom of assembly and expression and to guarantee the enjoyment of those rights without discrimination.