Home
/
Latest
/
Amid Azerbaijan’s suppression of public debate, no vote is free and fair 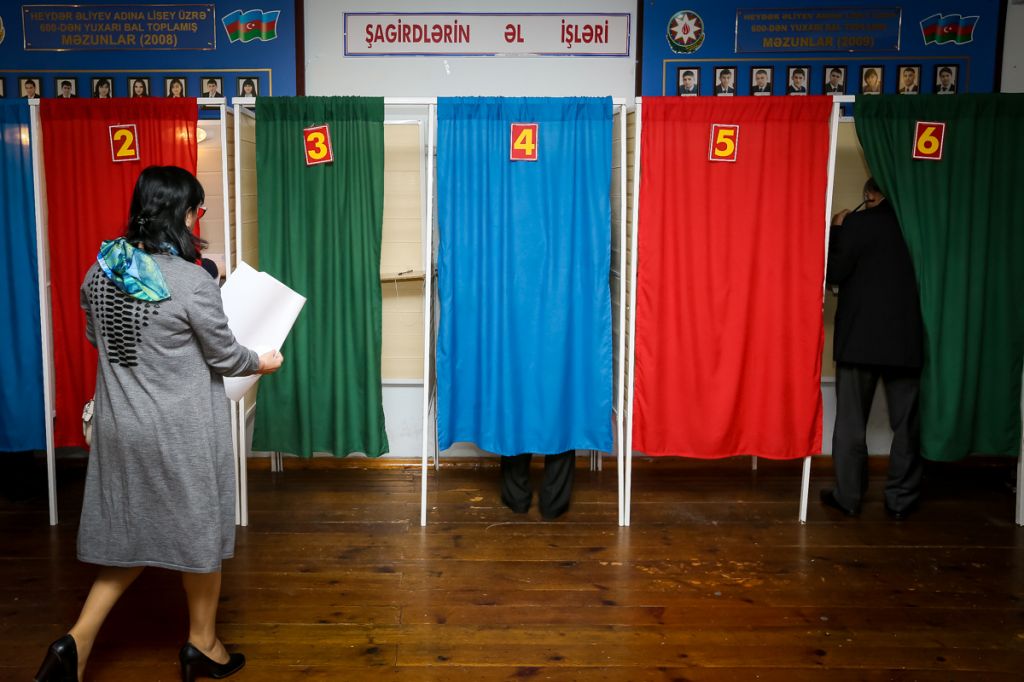 Amid Azerbaijan’s suppression of public debate, no vote is free and fair

The referendum in Azerbaijan comes during only the latest wave of detentions and arrests against activists and journalists by the Azerbaijani authorities, and amid international criticism of the process and political environment during the electoral period, as well as of the amendments themselves.

Preliminary results published by the Azerbaijan Central Election Commission show that all amendments to the Azerbaijani constitution will be adopted, following yes votes for the 29 different amendments sitting at around 90 percent, give or take a few percentage points either way for each amendment, with a turnout of around 70 percent.

Ane Tusvik Bonde, Regional Manager for Eastern Europe and Caucasus at the Human Rights House Foundation (HRHF), commented: “Azerbaijan’s crackdown against dissenting voices and ongoing repression of independent media – particularly during the electoral period – secured the successful adoption of the amendments long before Azerbaijani citizens went to vote. In this climate, no vote is free and fair.”

During the referendum, independent media reported electoral fraud, including through videos showing evidence of ballot stuffing, carousel voting, and voting of persons without registration. Despite this, several international observers reported no problems with the referendum, but HRHF stresses the limited extent of their monitoring, as shown by the member of the French Parliament, Thierry Mariani, who was not one of the officially delegated observers of the Parliamentary Assembly of the Council of Europe: “To tell the truth, we know without observing that everything is all right.”

The Azerbajani government did not formally invite the Office for Democratic Institutions and Human Rights (ODIHR) of the Organisation for Security and Cooperation in Europe (OSCE).

Intimidation and arrests of those raising their voice to criticise the process were reported regularly during the weeks that preceded the referendum. Journalists, bloggers, human rights defenders and political opponents were targeted by the authorities in an attempt to stop the spreading of information about the referendum and their participation in protest rallies. The authorities tried to prevent protest actions from taking place and on some occasions attacked and detained demonstrators and journalists.

Ane Tusvik Bonde said: “The outcome of the referendum is completely overshadowed by the events that preceded and accompanied it, and it cannot be considered a legitimate reflection of the people’s will. The authorities silenced independent voices who criticised the process and showed that they have not abandoned their strategy of carrying out politically motivated arrests, even while they release others.”

On 17 September, up to 10,000 people, as estimated by the organisers, attended a protest organised by the Azerbaijani Popular Front Party. According to the deputy chairman of the Popular Front Party, in many parts of the country the police blocked the roads to hundreds of activists who were heading to the rally in Baku. After the rally, the Baku police were seen attacking and detaining demonstrators, including journalists and civil rights activists.

The Azerbaijan-based independent organisation Election Monitoring and Democracy Studies Centre (EMDS), issued a statement following the referendum, asserting that “the official turnout does not correspond to real figures,” and that “increased restrictions on the freedoms of expression, assembly, and association in the last few years, along with a very short official campaigning period (22 days) and refusal to register opposition campaign groups, contributed to the lack of vibrant debate during the referendum.”

In August, EMDS commented that the Referendum Act will “significantly increase the power of the executive branch at the expense of the legislative branch, depressing the division of power.” The Act will further restrict human rights, particularly property rights, freedom of expression and assembly, and the right to citizenship.

On 20 September, the Venice Commission criticised the procedure for the adoption of the reforms as well as the proposed institutional reforms themselves. It stated that the reform “weakens further the Parliament and even judiciary, consolidating the already disproportionate power of the President and making the government even less accountable.” It also criticised “the lack of clarity of the rules set in the Constitution for passing such modifications, the facts that the Parliament was not formally involved in the process, and that the time for public discussions about the reform was insufficient.”

The amendments prolong the presidential term from five to seven years and introduce the posts of first vice-president and vice-president. Other changes relate to restrictions on the right to freedom of assembly, which will now be contingent on “public order and morality,” and the right to property, which could be restricted in the interests of “social justice and effective land use.” Azerbaijani citizenship can also now be withdrawn “in accordance with the law.”

Ane Tusvik Bonde said: “A popular referendum on constitutional changes should be an opportunity for true public debate on the future of the State’s institutions. Everyone should be allowed to freely and safely express their opinions during a campaign, as the right to participate in public life includes disagreeing with the government’s proposals. However, instead of promoting a popular debate, the Azerbaijani authorities started a new wave of their crackdown on civil society and opposition, which is directly related to the referendum.”

She continued: “It is a concern that independent organisations, such as EMDS, could not comprehensively monitor the elections due to restrictions on freedom of assembly and association.”

HRHF raised the shrinking space for civil society to participate in electoral processes, in Azerbaijan and elsewhere in Europe, at the UN Human rights Council in September, and continues to call for the Azerbaijani authorities to end their use of arbitrary detention as part of a crackdown on civil society, and to release and fully rehabilitate the rights of political prisoners.

In the week preceding the referendum, Special Rapporteur for Human Rights Defenders Michel Forst, on a visit to the country, called on Azerbaijan to “rethink [its] punitive approach to civil society.”

Ane Tusvik Bonde commented: “Azerbaijan has accepted visits by various international human rights mechanisms recently. We acknowledge this, and now call on the Azerbaijani authorities to implement the recommendations of these mechanisms.”

As highlighted by the UN Special Rapporteur himself, assessments by these international mechanisms have all found the same thing: a worsening situation for human rights defenders, civil society, and individual freedoms in Azerbaijan. He further urged the authorities to “[take] into account recommendations by international and regional human rights mechanisms.”

In further constitutional developments in Azerbaijan, the government has proposed a law that would allow it to “decide” whether to implement particular judgements of the European Court of Human Rights (ECtHR), similar to a law adopted in Russia, which is opposed by the Venice Commission. Azerbaijan’s adoption of this constitutional amendment is planned for the autumn session of the Milli Mejlis (the Azerbaijani Parliament).

HRHF Advocacy on Azerbaijan with European Union in Brussles

HRHF is meeting with officials of the European Union and Member States this week in Brussels, alongside Azerbaijani partners. We are calling on the European Union to show leadership in addressing the human rights situation in Azerbaijan. More specifically, as outlined in our briefing note “Azerbaijan: ‘Rethink punitive approach to civil society’.” HRHF calls on the EU to:

HRHF will also support the work of Azerbaijani journalists and civil society actors at the review of Azerbaijan at the United Nations Human Rights Committee in October. This will be a unique opportunity for independent international experts to review the state of civil and political rights in Azerbaijan.