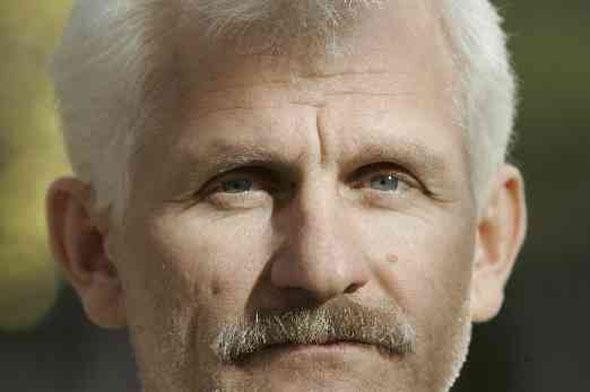 Once again, we call upon the authorities of the Republic of Belarus to immediately and unconditionally release Ales Bialiatski. He is in detention since 4 August 2011. Since, every independent United Nations body called for his release.

Ales Bialiatski, chairman of the Human Rights Centre Viasna and the vice-president of the International Federation for Human Rights (FIDH), was jailed on politically motivated charges. On 24 November 2011, he was sentenced on tax-evasion charges. The charges against him stemmed from his alleged use of personal accounts in Lithuania and Poland to receive funding from international donors for rights activities in Belarus.

As many NGOs throughout the world, the Human Rights House Network has repeatedly asked for Ales Bialiatski’s release.

In an opinion published in January 2013, the United Nations Working Group on Arbitrary Detention considered Ales Bialiatski as arbitrary. Following the publication of the decision, the Human Rights House Foundation again asked for the release of Ales Bialiatski at the UN Human Rights Council:

The United Nations Special Rapporteur on the human rights situation in Belarus Miklós Haraszti in a statement published on 2 August 2013 said that “the detention of Ales Bialiatski is clearly a consequence of him continuing his not only legitimate but also legal work under international human rights law” [after Viasna was denied its registration]. “The fundraising undertaken by Ales Bialiatski for the purposes of allowing the very existence of Viasna, and continuation of its activities was in conformity with international human rights law,” Miklós Haraszti stressed.

We are also glad that the Special Rapporteur echoed HRHN’s concerns about the health situation of Ales Bialiatski.

International day of solidarity with civil society in Belarus is initiated by several civil society organizations and networks, including the Belarusian Human Rights House.

“We will observe this day every year, until the situation of civil society in Belarus changes: until  its authorities put an end to imprisoning people for human rights activities, until there is a guarantee of fundamental human rights: freedom of expression, assembly and association.” (Manifesto of the Solidarity Day)

FIDH created a Thunderclap. This tool will allow your organization and other participants to simultaneously send on 4 August, via your Facebook and Twitter accounts the following message: #Belarus: Today Ales Bialiatski has been in jail for 2 yrs for defending #humanrights #FreeAles

The Human Rights House Network (HRHN) repeatedely called for the immediate and unconditionnal release of Ales Bialiatski. To us, his arrest was arbitrary from the first day on, 4 August 2011: