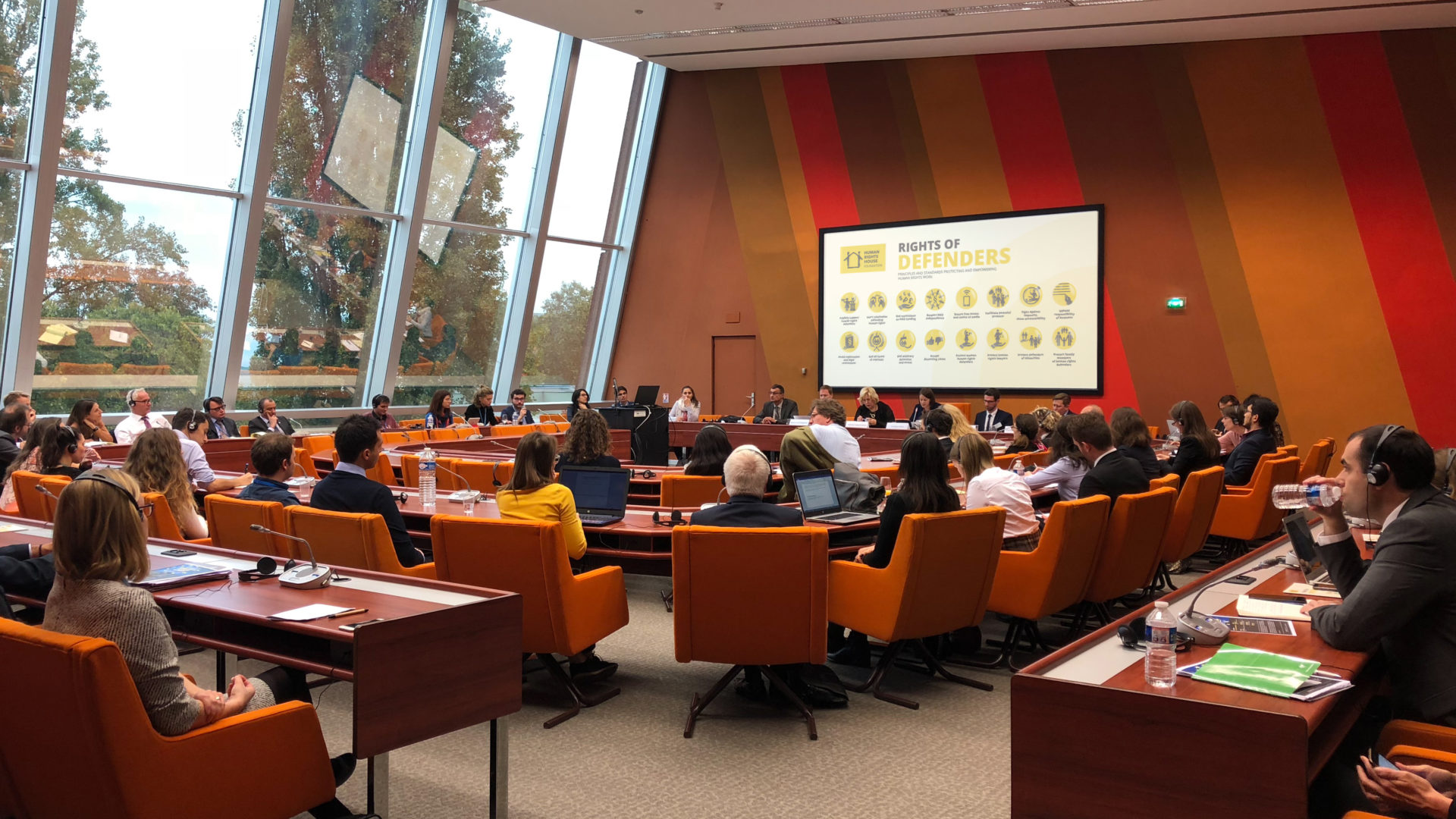 HRHF continues to advocate for the freedoms of assembly, association, expression, and the right to be a human rights defender.

We met with 445 policy- and decision-makers in close partnership with human rights defenders from around the network of Human Rights Houses working at the forefront of positive change and development in their countries. More than 82% of these advocacy meetings were followed up by action from national and international policy makers.

Our campaigns in 2018 further enhanced our visibility and influence. HRHF launched the campaign “Rights of Defenders” with the Human Rights Houses to celebrate defenders, to raise their profile, and increase awareness of 16 international standards that protect and empower them. Also, together with the Houses and partners, HRHF carried out a campaign in support of imprisoned Azerbaijani video blogger Mehman Huseynov, who was released in March 2019.

We continued sustained advocacy addressing the human rights situation in Crimea. This included training in Kyiv for defenders, advocacy meetings in the United States, and submitting a report to the Human Rights Council (HRC) as part of Russia’s Universal Periodic Review (UPR). On 15 November, the Third Committee of the UN General Assembly passed a resolution on Crimea, incorporating specific issues raised by HRHF and our partners. This work was strengthened by the key findings of the Human Rights Houses mission to Crimea.

HRHF was engaged in the appointment of a new UN Special Rapporteur (UNSR) on association and assembly, sharing oversight and coordination of civil society engagement in this process with the World Movement for Democracy and Solidarity Centre. HRHF assisted the new mandate holder, upon his appointment, through efforts including the organisation of a strategic consultation with the new rapporteur, in Washington DC alongside several other NGOs.

In Armenia, HRHF facilitated a workshop on UN mechanisms for members of the Yerevan House and other civil society organisations. This came ahead of a visit of the new mandate holder to Armenia in early November. Given the importance of ensuring positive policy and legislative change in these areas after the democratic revolution in Armenia, the workshop was designed to prepare civil society for the visit and to encourage thinking on how to follow-up with the government.

Ahead of the UPR of Azerbaijan at the HRC, we organised an advocacy round in Geneva with representatives of the Azerbaijan House. Many States made recommendations formulated by HRHF, which were included in a report submitted to the UN by the House. In Brussels, HRHF and House representatives updated decision-makers on recent developments, including in a closed-door discussion organised with the European Endowment for Democracy targeting diplomats from EU Member States with recommendations, including in the context of negotiations for a future agreement between the EU and Azerbaijan.

On Belarus, HRHF helped to significantly strengthen support for the renewal of the mandate of the UNSR on Belarus, as a key tool to monitor the situation in the country. This included advocacy in both Geneva and Brussels, alongside partners from the Belarusian House.

HRHF continued to advocate the findings of its reports on NGO funding and Ill Democracies, both published in 2017. In the first half of 2018, we launched the Ill Democracy report internationally, including public presentations in Brussels, Hungary, Croatia, Poland and at a side-event at the Parliamentary Assembly of the Council of Europe.

In November, HRHF submitted a briefing note to the OSCE report on human rights violations in Chechnya, under the Moscow mechanism. This note was based on documentation from our partners, and led to the inclusion in the report of the cases we raised.

In total, we raised the issues that matter to us 260 times across our platforms, and significantly enhanced our online presence with a new visual profile, website, and resources on our positions, work methods, and values.

Top photo: The Situation of Human Rights Defenders in Europe, briefing of the Committee of Ministers of the CoE in November 2018.