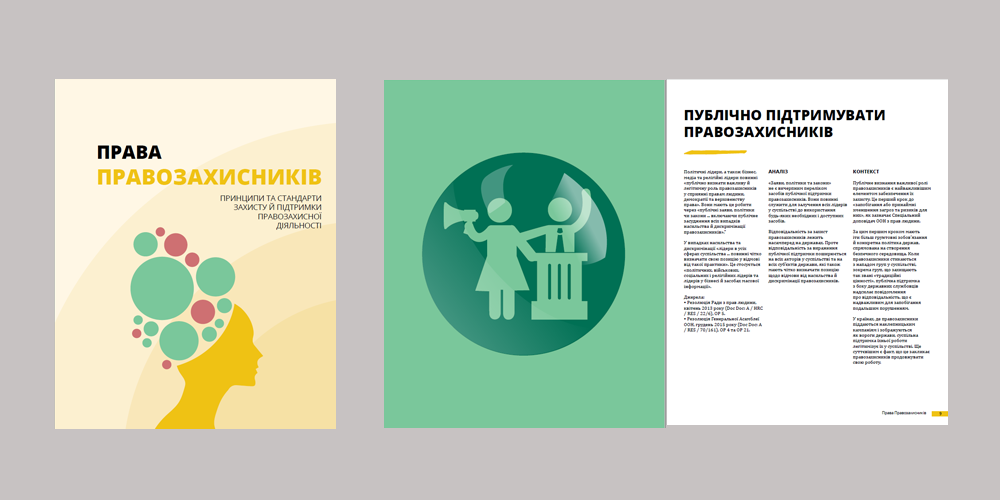 Human rights defenders are agents for positive change and development – they are key in protecting against violations and in advancing universal human rights. However, threats, intimidation, attacks, criminal charges, and restrictions against defenders are increasing. Both State and non-State actors are seeking to shift the narrative on defenders from protector of the people to enemy of the State.

To reverse this narrative and to ensure that defenders are celebrated and protected, HRHF and the Human Rights Houses launched the campaign “Rights of Defenders”. The goal was to celebrate defenders, raise their profile, and increase awareness of 16 international standards that protect and empower them.

Read more about our work on “rights of defenders”.

Crimea: Breaking the wall of silence 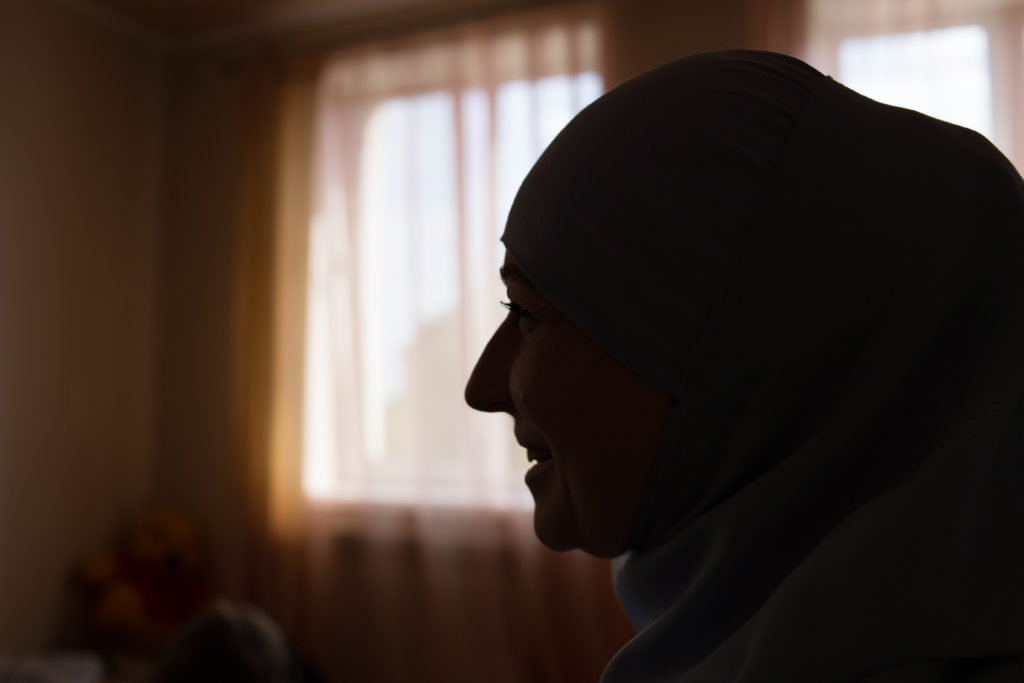 In the months following, HRHF and Human Rights Houses raised the key issues identified by the Mission. The report was presented at events and featured in the press in Kyiv and Oslo, and also launched in Berlin, Vilnius, Tbilisi, Geneva (at the Human Rights Council), and in Strasbourg (at both the European Parliament and Council of Europe). The Ukrainian embassy in Oslo and the Norwegian embassy in Ukraine have hosted high-level diplomatic briefings. We continued our advocacy on Crimea, including meetings in the United States and submitting a report to the Human Rights Council (HRC) as part of Russia’s Universal Periodic Review (UPR).

On 15 November, the Third Committee of the UNGA passed a resolution on Crimea, incorporating issues raised by HRHF and partners. This work was strengthened by the key findings of the mission to Crimea. At the Council of Europe, our advocacy has contributed to an increased focus on human rights in Crimea, and to the CoE Commissioner for Human Rights Dunja Mijatović announcing that she is planning to visit the peninsula.  At the national level, the Mission and our follow-up with partners has led to high visibility of our findings and discussion in countries in the region, particularly in Belarus and Georgia.

Read more about Crimea: Breaking the wall of silence

A year for human rights defenders

Coming at a crucial time for civil society and democracy, we launched the case study Resisting Ill Democracies in Europe in 2016, with this issue continuing to spark important debates across Europe.

This work includes in-depth research into the “playbook” of illiberal governments at the country level, but the aim is broader: to identify common trends within ill democracies and build understanding to inform early action. The case study also offers practices and strategies for civil society to resist.

The study was published by seven human rights organisations – five of them part of the network of Human Rights Houses.

Read more about our ongoing work on Resisting Ill Democracies in Europe.

Human Rights House Baku opened in 2007. By 2015, the authorities had forced the House to cease activities (in 2011) and imprisoned many of its members, and adopted restrictive laws as part of a crackdown on civil society.

Human Rights House Foundation, with the Houses, campaigned long term for their release, channelling all of its programmes toward a single cause. In 2016 we saw its impact as several of our partners were released from prison.

Later, while the crackdown in Azerbaijan continues, we experienced how joint efforts and solidarity made a difference in 2018. We campaigned successfully for the release of anti-corruption video blogger Mehman Huseynov, provided protection through recognition in the form of awards, and documented a pattern of repression in Azerbaijan before the European Court of Human Rights.

Read more about how we protected defenders in Azerbaijan in 2018.

Greater visibility and influence in 2018 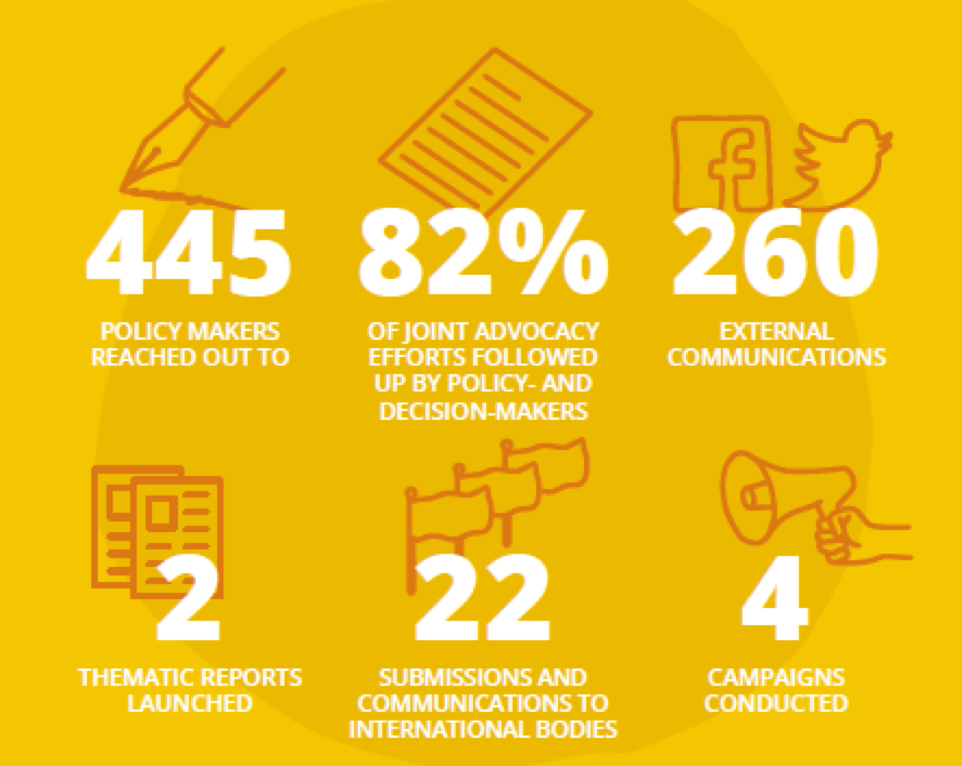 We continued to advocate for the freedoms of assembly, association, expression, and the right to be a human rights defender.

We met with 445 policy- and decision-makers in close partnership with human rights defenders from around the network of Human Rights Houses. More than 82% of these advocacy meetings were followed up by action from national and international policy-makers.

Read more about how our campaigns and many advocacy activities ensured that we achieved greater visibility and influence in 2018.

Greater visibility and influence in 2017 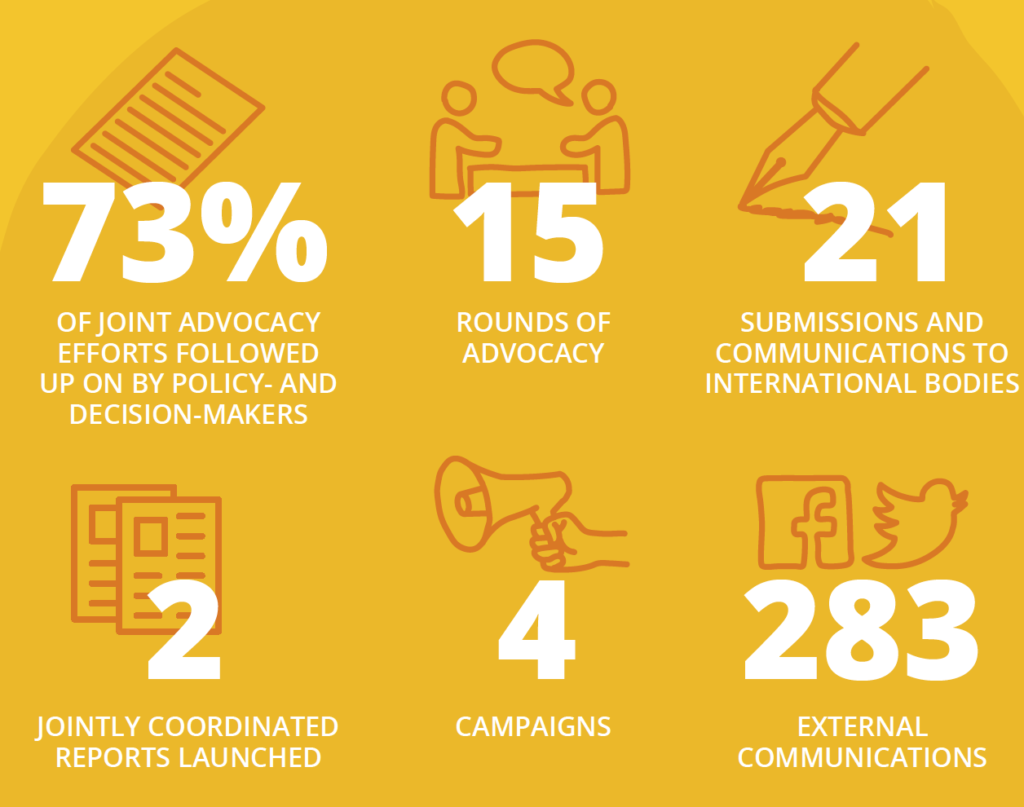 HRHF achieved good progress towards greater visibility and influence on the human rights agenda in 2017. More than 70% of our advocacy efforts undertaken with the Human Rights Houses were followed up by interventions and actions by national and international policy-makers, showing the targeted strength of our interventions. On top of this, our 15 rounds of advocacy enabled us to reach out to 412 policy- and decision-makers, double the number than in 2016. These advocacy rounds focused on country situations or on freedom of assembly, association, expression, and the right to be a human rights defender.

Our campaigns also contributed to our visibility and influence. Together with Human Rights Houses and partner NGOs, we published two joint reports and held launch events across Europe as part of campaigns on Ill Democracies and on Funding Civil Society.

Read more about how we achieved greater visibility and political influence in 2017.

Greater visibility and influence in 2016 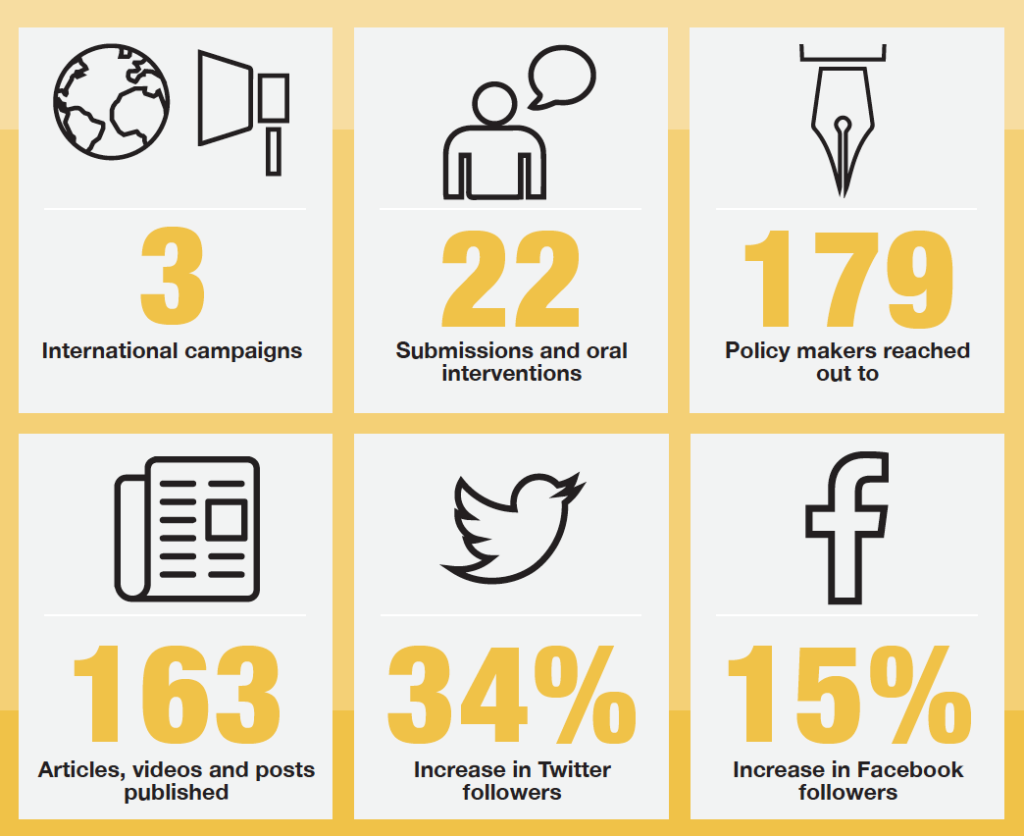 The quality of information we produced significantly improved and our distribution channels broadened, enabling us to reach a larger audience to generate political support for human rights defenders.

With influence on the human rights agenda, we successfully supported the renewal of the mandate of the UN Special Rapporteur on Belarus, ensuring the continued work of the only independent international monitor of human rights in the country.

We also successfully advocated for the UN to adopt a resolution focused on human rights in Crimea, and for the EU to keep a principled human rights position, resulting in a strong resolution on Crimea by the European Parliament.