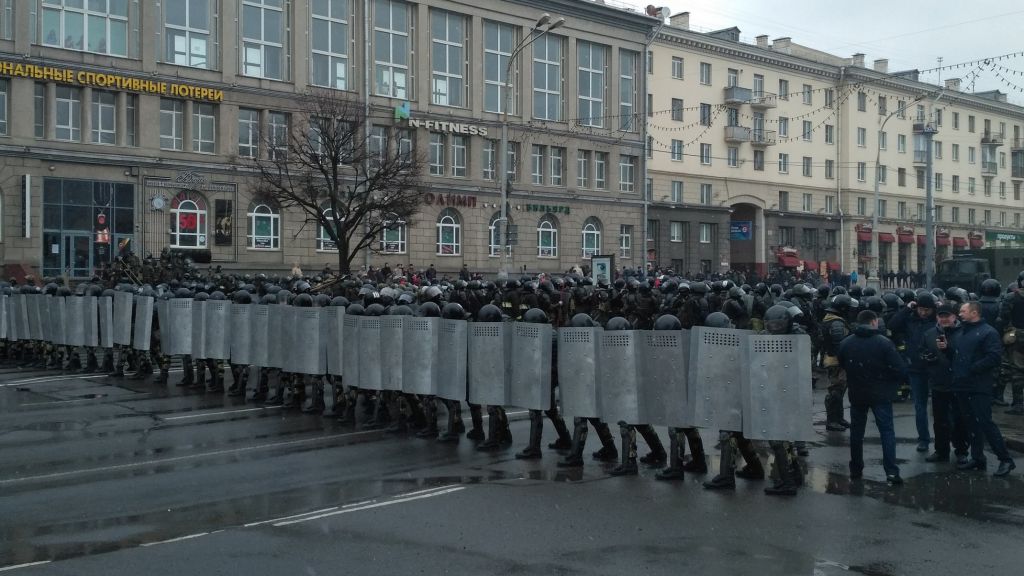 In a joint letter, HRHF urges delegations at the UN Human Rights Council (HRC38) to support the renewal of the mandate of the Special Rapporteur on Belarus.

We, the undersigned international human rights organizations, urge your delegation to support the renewal of the mandate of the Special Rapporteur on the human rights situation in Belarus under Item 4 at the United Nations Human Rights Council.

At its 38th session in June, the Human Rights Council (HRC) will consider the human rights situation in Belarus. Since the creation of the mandate of the Special Rapporteur in 2012, there has been no systematic improvement in the human rights situation in Belarus. On the contrary, all legislative and systemic restrictions on freedom of expression and association remain in place, and violations of civil and political rights are coupled by economic and social rights’ abuses. The peaceful demonstrations on March 25th 2018, also known as Freedom Day, and which are organized every year, were once again met with preemptive house arrests of civic and political activists and journalists as well as the arbitrary arrest of about a hundred of peaceful marchers.

Calls by civil society, the Special Rapporteur and the European Parliament to end the most recent blocking of the charter97.org website have been ignored while the amendments to the Law on Media currently before the Parliament aim to further control access to sources of information, particularly online, including via social networks. Under the proposed law, the authorities would be able to block any online content without a court order on even vaguer grounds than at present.

Authorities continue to pressure human rights defenders, independent journalists and opposition activists, using the court system to harass them, impose preventive or administrative detention and levy severe fines. Moreover, in September 2017, eight lawyers defending clients in a criminal case assessed by human rights defenders as politically motivated were subject to a qualification process controlled by the Ministry of Justice. As a result, Anna Bakhtina, renown for her work in defending political prisoners, lost her practicing license while the license of the remaining lawyers was prolonged conditionally for 6 months. Even if they all passed the “examination” procedure in March 2018, the legislation that allows the authorities to arbitrarily revoke a lawyer’s license remains in place.

Although we welcome the review of Belarus before the Committee Against Torture in April 2018, we also note the Committee regrets that Belarus has not implemented its previous follow up recommendations. It must be stressed that genuine cooperation with Treaty Bodies does not stop at the review but includes the implementation of recommendations made to the State party in line with its international obligations under the treaty.

On the issue of death penalty, the government of Belarus has not shown a real willingness to cooperate with international human rights mechanisms and continues to execute prisoners in violation of international standards. The many requests of the Human Rights Committee to suspend executions continue to be ignored and the rights of persons sentenced to death continue to be violated at all stages of the proceedings and during detention.

It has provided constant independent monitoring of the situation, highlighted worrying trends that had not previously received sufficient attention, and detailed the systemic governance issues largely responsible for the systematic human rights violations that occur in Belarus. The mandate holder regularly consults with Belarusian civil society, for whom the mandate has been essential. The work of the mandate holder, particularly his analysis and recommendations, could serve as a roadmap towards genuine reform for the Belarusian authorities. Upon the renewal of the mandate, a new Special Rapporteur will be appointed at the 39 th session of the Council, and States should press the government of Belarus to cooperate with the new mandate holder with a view to put an end to the systemic human rights violations in the country.

Our organizations also underline that the recent creation of an OHCHR technical advisor in Minsk does not have the mandate to take action on information provided by civil society or the ability to publicly report on human rights violations. The creation of this position is a positive step, but should not – and cannot – replace the essential work of the Special Rapporteur.

In light of the “cyclical” nature of human rights abuses in Belarus and of the above concerns, we urge the Human Rights Council to maintain international scrutiny over the human rights situation in Belarus by renewing the mandate of the Special Rapporteur under agenda item 4 until tangible steps are taken by the government of Belarus, including:

By supporting the renewal of the Special Rapporteur’s mandate, your delegation would send a strong signal to the Belarusian authorities and civil society that it is committed to human rights progress in the country. We look forward to seeing Belarus move towards a genuine path of human rights reform that would allow human rights defenders, journalists, lawyers and activists to operate without fear of arrest or harassment. However, that will require the government to demonstrate concrete progress on each of the benchmarks above.