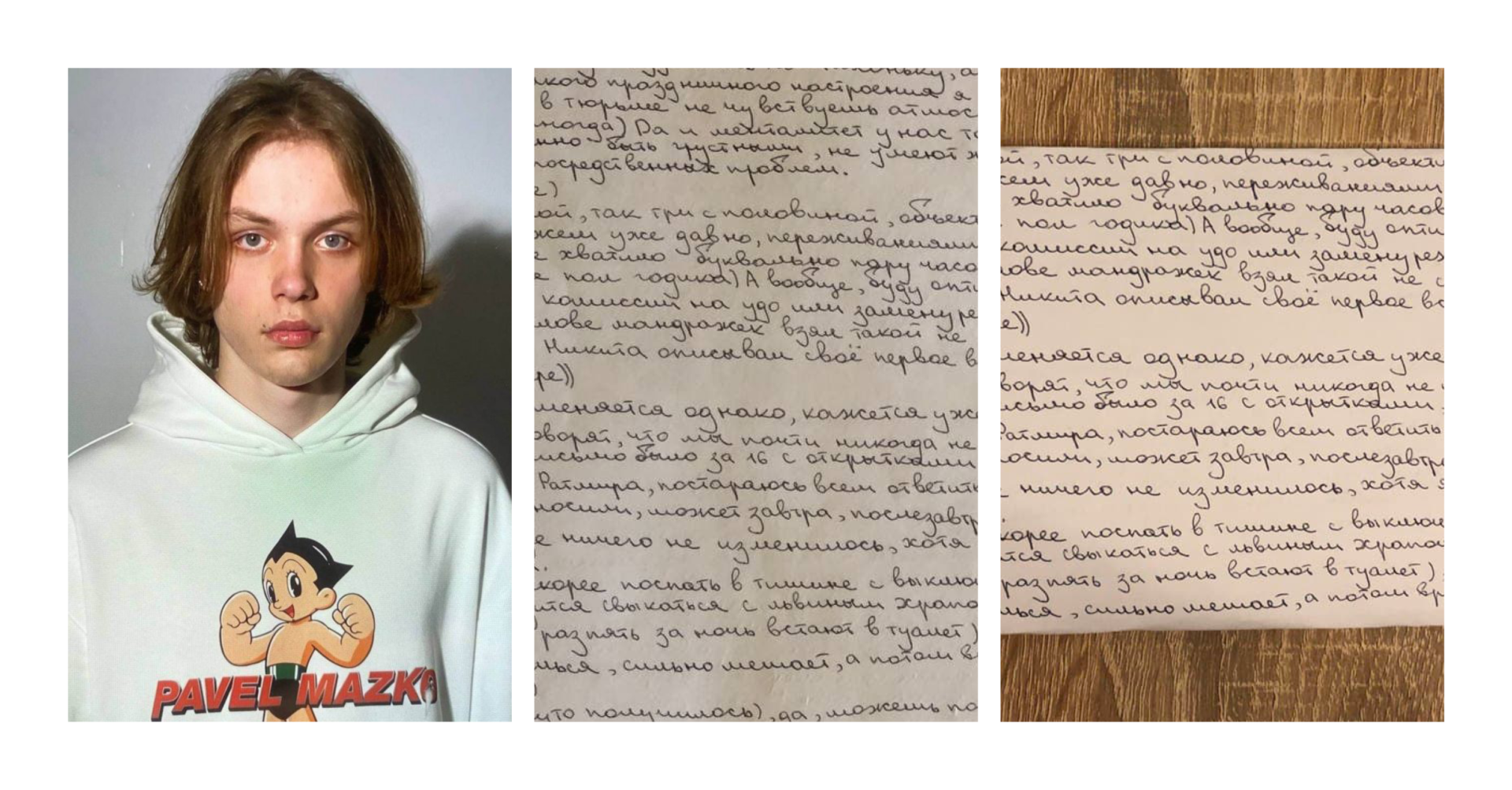 Prior to his detention, he designed clothes and carried out volunteer work in support of marginalised peoples and those with disabilities. On 8 November 2021, he was sentenced to three and a half years in a general security penal colony.

Below are two letters from Pavel: the first is to his eight-year-old brother, Ratmir, and the second is to his mother. Both are written shortly after his 19th birthday, which was on 21 October 2021. In his letter to his brother, he asks him if he’s been watching a Ukrainian travel show called “Heads & Tails”, in which two hosts travel to the same country/city with very different budgets.

In his letter to his mother, Pavel writes about the challenges of being in detention. Although, at the time of writing, he had not officially been sentenced by the court, he knows that the prosecutor has requested a three and a half year sentence, and that it is extremely likely that the court will satisfy that request. He had expected the prosecutor to request a three-year sentence and it took him “a couple of hours” to come to terms with the extra six months. It’s not clear what speech he’s referring to when he refers to the “first entrance speech in St. Petersburg.” In the letter, he mentions Ratmir, and his friends Sasha, Kolya, Matvei, and Zakhar. It is understood that Oleg is a fellow detainee.

I’m doing well. I had my birthday recently, [and] had some sweet food – I ate Snickers, drank tea and coke! I read a lot of books – I’m interested in geography and outer space. I also work out a lot and I got stronger 😀

Granny has a cool magazine [in her house] – it’s called Atlas, which is about countries and their cultures, take it if you want it.

What’s new with you?

What karate book are you reading?

What kind of videos do you watch?

What do you play?

What music do you listen to?

How are your grades?

P.S. Sending you a sticker.

It’s been a long time since I wrote a letter, for some reason I wanted to take a little break from it, and to answer everything after my birthday. I’m going to share my impressions: I’ve become one year older, I hope not only older but also more mature :). In fact I’m starting to realise the beauty of youth now… I always wanted to jump all these steps and be 20 years old, but now I’m glad that I’m only 19, so I still have time to think about life :). You look at people, think slowly, analyse.

Of course, I didn’t feel very festive. Of course not. In prison, the only time you don’t feel the prison atmosphere is in your dreams sometimes:) Yes, most people [who aren’t in prison] have a [negative] mentality, and are constantly sad, they can’t live in the present or distract themselves from their mediocre problems.

A little bit about the [upcoming] court [hearing] 🙂 Three and a half years… so be it. Objectively we cannot change anything for a long time, the experiences here are certainly not going to help. I had [to take] a couple of hours to come to terms with that extra half a year 🙂 And in general, I will be optimistic – I will leave the camp at the first commission to the parole or on a regime change.

At the last word, I got the shivers, and it’s not all bad, right? Just like Nikita was describing his first entrance speech in St. Petersburg 🙂 How dramatically everything is changing though; it seems even a three-year sentence would have satisfied me now. It’s not for nothing they say that we almost never appreciate what we have 🙂

Your last letter was from the 16th with postcards, a letter from Sasha, Kolya and Matvei, and Ratmir. I will try to reply to all of them at the weekend, but today they won’t be receiving any mail. Maybe tomorrow or the day after that I will get some more.

The pills have not changed, but I may not notice the effect. I want to sleep sooner in silence with the light off. Imagine having to get used to the […] snoring, the night light, and the fact that some people go to the toilet five times a night 🙂 At first you get hung up on it, it bothers you a lot, but then you kind of get used to it and it’s OK.

With Bitcoin it’s cool :). Yes, you can try to buy more. I even recommend it 🙂 I don’t know if you remember what I told you about Zakhar – how he explained it to me. He just sells some of his available stock when it starts to fall and buys it when it starts to rise :). It certainly sounds very simple, maybe it is… try it out 🙂

About Oleg, he’s the one I was still in cell 6 with, you get it? He is still 49 years old. I wrote to you quite a lot about him. He often said how cool it would be to just turn into a bug and fly away 🙂 and almost everyone laughed at him :).

In seven months, my world hasn’t just turned inside out, it’s turned completely upside down 🙂 I got some new books today, there’s a good one – The Great Gatsby, I saw a movie based on it with DiCaprio – it’s not bad, I recommend watching it 🙂