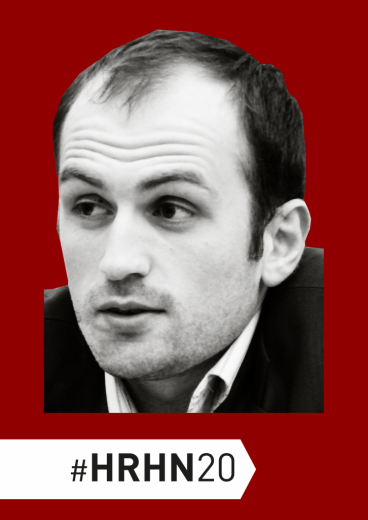 They have been silenced, so the Network will tell their story. Human Rights House Network, united in Oslo to celebrate its 20th year, was walking to raise awareness of those who are not free to walk.

It is an act of solidarity, seeking justice and freedom for human rights defenders. Those you see on the T-shirts have all faced repression in the course of their work: most are in prison; some have been killed; and a few are now free. The actions and charges against them are politically motivated, and are designed to send a message that dissenting voices are not tolerated.

We want to tell the individual stories of these human rights defenders. They are journalists, academics, filmmakers, lawyers, and activists that have been targeted because of their work. They are from Russia and the North Caucasus, Ukraine, Azerbaijan, and Belarus. Their voices have been silenced, so the Network is here to tell their story.

The stories speak for themselves, so the walk will be silent. We will distribute cards telling the stories during the walk, and we will walk three by three – the legal limit on assembly enforced in Belarus.

The repression does not end with these 15 faces. Many more have been killed or imprisoned, and many of those who walk here today have suffered threats, intimidation, and worse. These 15 stories will raise awareness and support for those who desperately need it, while building a wider narrative of human rights abuses and the decline of civil society in some countries. The stories have similarities – politically motivated charges, abuse of law, unfair trials, threats, intimidation – and these common tactics must be opposed at all levels.

You will see Ales walking among us; not long ago he was on a “Free Ales” T-shirt. We need to raise awareness of the plight of the others, get governments and international institutions to apply pressure, and provide practical support to defenders within these countries. Then, hopefully, those now on the T-shirts will walk free, and the crackdown on civil society will end.