OSCE media freedom watchdog Miklos Haraszti welcomes United Kingdom’s decriminalisation of defamation, urges other states to follow. ‘This is a crucial achievement not only for the country’s own freedom of speech, but a great encouragement to many other nations,’ Haraszti said.

“The United Kingdom is the first among the Western European participating States in the OSCE to officially decriminalize defamation.

This is a crucial achievement not only for the country’s own freedom of speech, but a great encouragement to many other nations which are still to pursue such a reform,” Haraszti said.

An amendment to the Coroners and Justice Act decriminalized defamation, sedition and seditious libel, defamatory libel and obscene libel in England, Wales and Northern Ireland.

The Coroners and Justice Bill was given Royal Assent and became an Act of Parliament (law) at 16h47 on 12 November 2009.

“My Office has recommended the decriminalization of defamation for several years. Although these obsolete provisions have not been used in Western Europe for decades, their ‘chilling effect’ remained.

Their existence has served as justification for states unwilling to stop criminalization of journalistic errors, and leave those offences solely to the civil-law domain,” Haraszti said.

In most countries it is punishable by imprisonment, substantially ‘chilling’ critical speech in the media. Most imprisoned journalists have been convicted for defamation.” 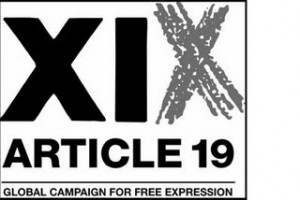 In a statement on defamation decriminalization, ARTICLE 19 welcomes this step:

‘ARTICLE 19 and our partners have been campaigning for the decriminalisation of defamation in the UK for several years.

Criminal defamation has not been used in the UK since the 1970s, but its "chilling effect" remains. Moreover, states around the world justify their persistent use of criminal defamation according to the example set by the UK.

In many countries, criminal defamation laws are abused by the powerful to limit criticism and to stifle public debate. The threat of harsh criminal sanctions, especially imprisonment, exerts a profound chilling effect on freedom of expression.’

Now that defamation has been decriminalised, ARTICLE 19 calls on the government to reform the UK’s over-broad civil defamation laws:

‘In particular, the laws should require that plaintiffs should prove the falsity of statements, block foreign plaintiffs from using UK courts to silence non-UK speakers, require courts to consider the public interest in publication, limit excessive lawyers’ fees, which can currently run into millions of pounds in a single case, and update the laws to better protect Internet publications.’