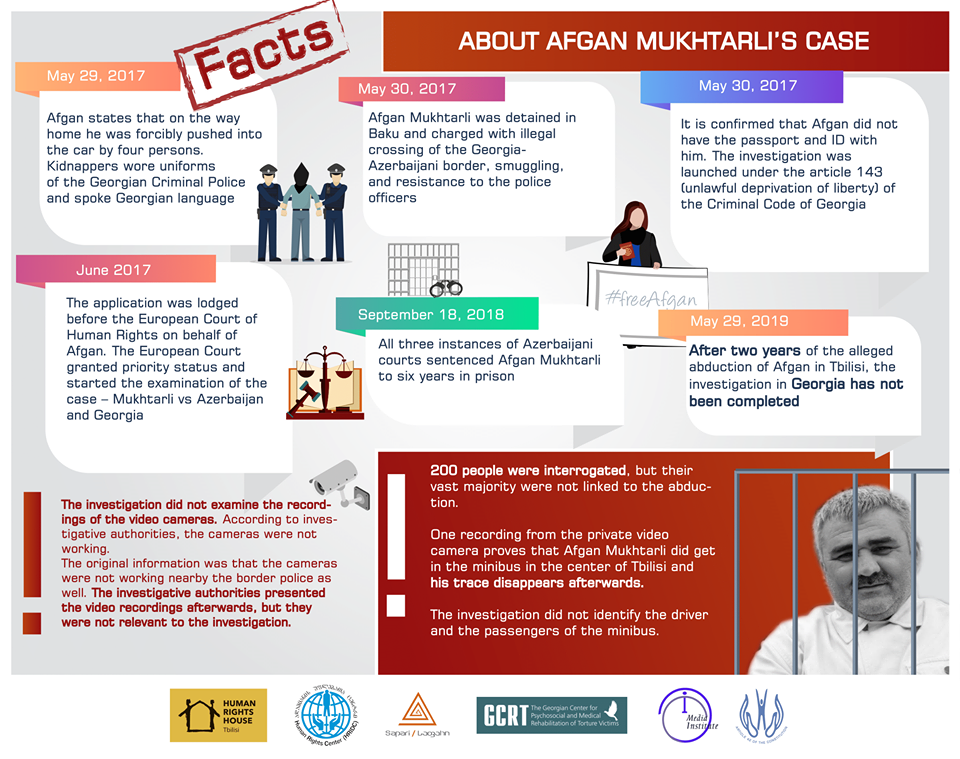 Human Rights House Tbilisi, its member organisations, and a coalition of NGOs have issued a joint statement urging the  Georgian authorities to take all necessary measures to effectively investigate Afgan Mukhtarli’s alleged abduction and hold any offenders accountable.

(This statement was originally published by Human Rights House Tbilisi on HRHT.ge).

May 29 marks two years after the disappearance of the Azerbaijani journalist Afgan Mukhtarli in Tbilisi. Based on the decision of the local court he is currently serving the prison time in Azerbaijan for the illegal border crossing, smuggling, and resistance to the police.

The investigation by the Georgian investigative authorities into alleged abduction of Mukhtarli is still ineffective, without any progress. The number of requests Afgan’s advocates called on the government, including the request to grant the victim status to Afgan Mukhtarli and his wife, have been left unanswered.

Even though 30 civil society and media organisations have addressed the Parliament of Georgia, it refused to create the temporary commission on investigation of the alleged abduction of Mukhtarli in Georgia.

Currently, the case of Afgan Mukhtarli is examined in the European Court of Human Rights with priority status. The application that concerns the violation of several rights guaranteed by the European Convention of Human Rights is lodged both against Georgia and Azerbaijan. (Mukhtarli v. Azerbaijan and Georgia, Application No. 39503/17). The governments of both states have submitted answers to the questions asked by the Court. The questions posed before the government of Georgia were in regard to the alleged abduction of Mukhtarli, as well as the ineffective investigation.

The disappearance of Afgan Mukhtarli from Tbilisi and his reappearance in Azerbaijani prison has resulted in many negative consequences for Georgia’s domestic or international public image. The questions about Mukhtarli case by the international partners of Georgia, like the United States of America, European Union or European Council, as well as international organiations working on human rights violations, have been left unanswered.

Successful completion of the Mukhtarli case in the European Court of Human Rights will not only bring financial damage to Georgia but once again will hurt its public image of a democratic state oriented at protection of the human rights. Whereas, if the investigative authorities had conducted the effective investigation, this additional damage could have been avoided.

Signatory organisations once again urge the investigative authorities of Georgia to take all the necessary measures for the effective investigation of Afgan Mukhtarli’s alleged abduction, reveal offenders and punish them.

* Interests of Afgan Mukhtarli on the national and international level are protected by the Human Rights House Tbilisi member organisation “Article 42 of the Constitution”.

Human Rights House Tbilisi on behalf of its member organisations:

Institute for Development of Freedom of Information (IDFI)