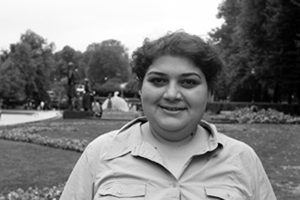 On July 24, 2015 Baku Court on Grave Crimes held pre-trial session into the case of Khadija Ismaylova, Azerbaijan investigative journalist. The three member court collegium considered motions of the parties. Not everybody could attend the session due to small space in the court room and high number of attendees.

Everybody had to “fight” to get into the courtroom from the side entrance. Unless you are careful, you might get even injured. However, despite all your efforts, unless you are on the list of court bailiffs, you cannot enter the hall.
Among media sources, only journalist of APA.TV was allowed to enter the courtroom. It is a state TV-company and according to unofficial information, the Minister for Emergency Situations of Azerbaijan funds it. Sister of the accused journalist, representatives of international organizations and journalists stayed behind the closed door. The bailiff clarified there were no free seats in the courtroom and people could not stand in it.

This problem was observed during the trials into the cases of other Azerbaijan human rights defenders too, but this time it was aggravated with shouting, pushing…

About 50 persons outside the courtroom were clapping during several minutes and shouted “Khadija”.

After the trial, representative of the French Embassy said there were about 6-7 free seats in the courtroom. Apparently there was different reason why people were refused to attend the process. The judiciary authority allowed only privileged people to enter the hall to show off well before international community. Attendance of other people was not acceptable for them.

At the pre-trial session the defense side raised five motions. Lawyer Pariz Namazli requested to release Ismaylova from the cage, to change the compulsory measure into house arrest, to drop criminal liability, to remove 8-9 witnesses from the case and to involve Yalchin Imunov into the case as a lawyer.

The prosecutor’s office did not agree with any of the motions. Neither the court satisfied them.

Azerbaijan journalist and contributor to the Radio Liberty/Free Europe Khadija Ismaylova was arrested on December 5, 2014. She was accused of bringing Tural Mustapaev to the condition of suicide. Initially the investigation started based on Mustafaev’s testimony. He was journalist of Radio Liberty/Free Europe and Meydan TV. On October 21, 2014 he drank poison in Baku National Seaside Park. Initially Mustapaev was taken to hospital and then to psychic clinic.

The journalist told Meydan TV that based on his testimony to the investigators, it was concluded that Khadija Ismaylova brought him to the condition of suicide.

Later on Mustapaev confessed that he had blamed Ismaylova under oppression from law enforcement officers. In April of 2015 he withdrew the complaint. However, criminal litigation against Khadija was not dropped and she was not freed. If the accusation is proved, the journalist might be sent to prison for 7 years. Next trial into the case will be held at the Baku Court on Grave Crimes at 11 am on August 7.

Khadija Ismaylova is author of numerous critical publications about business interests of President Ilham Aliyev and his family members.

Current accusation against Khadija is not the first one. She was blamed of swindle too but at that time the court just fined her. Even earlier, in 2012, illegal personal video-footage were disseminated in internet against the journalist. “Khadija Ismaylova openly investigated corruptive activities of the government, among them business interests of the president’s family. In October 2014 she was denied to leave the country without any explanations. Government controlled media sources continued smear campaign of 2012 against her,” 2015 Annual Report of Human Rights Watch reads.

The accusation against her is different but smear campaign against Khadija Ismaylova and other human rights defenders is very similar. According to international organizations, there are several ten political prisoners in Azerbaijan. Human Rights Watch 2015 Report reads that Azerbaijan government has arrested 33 HRDs in the country for politically motivated charges; 10 of them are journalists and bloggers.

Bank accounts of the members and leaders of independent civil groups were blocked. In accordance to the 2013-2014 legislative amendments, the government deprived the human rights defenders of the right to register foreign grants. It hindered or completely suspended their activities. Leaders of the most authoritative civil society organizations of the country were arrested for equal charges.