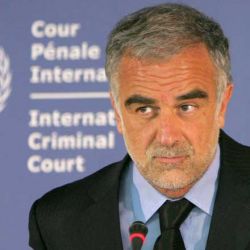 The International Criminal Court’s Chief Prosecutor Luis Moreno-Ocampo, right, today opened, inspected and resealed the envelope containing names of suspected sponsors of the post-election violence handed over to him by Kofi Annan. “There will be no leaks,” he said to the press. “The contents will remain confidential”.

In addition to the envelope, Mr Moreno-Ocampo received six boxes containing documents and supporting materials compiled by the Commission of Inquiry into the Post-Election Violence, locally known as the Waki Commission.

The boxes were stored in a vault at the court’s investigations unit. The commission provided the names of a number of individuals and why they should be investigated. Asked whether a report by the Kenya National Commission on Human Rights was part of the evidence received on Friday, the prosecutor’s office was non-committal, only confirming that they had reviewed a range of different reports and statements including “public reports authored by Kenyans and international organisations as well as communications sent to the court.”

As part of its preliminary investigations, Mr Moreno-Ocampo says he has contacted various parties in Kenya seeking further information in relation to alleged crimes. “I have to say that much information is available,” he said. The officials said he will continue with his own investigations to “reach an impartial conclusion as to whether or not to investigate those individuals or others, or none.” Receiving the materials, Mr Moreno-Ocampo expressed his determination to handle the Kenyan case because it was the “only way to prevent the commission of new crimes in the next elections.” He, however, stressed that the main responsibility lies with the Kenyan government. 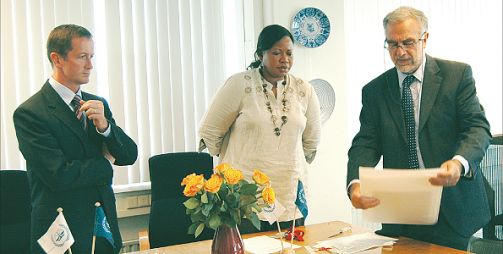 Moreno-Ocampo studies the list of Kenyan suspects at the International Criminal Court headquarters today with the prosecutor-designate, Fatou Bensouda from The Gambia, and Michel de Smedt, the acting head of investigations. PHOTO/ICC