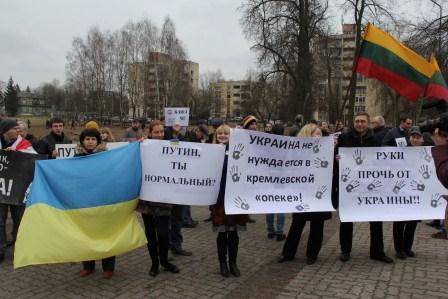 The Barys Zvozskau Belarusian HRH against Russian intervention in Ukraine

The protest against the stay of the Russian army on the territory of Ukraine took place on 3 March near the Russian Embassy in Lithuania. The event was attended by about a hundred activists, among them – representatives of the Barys Zvozskau Belarusian Human Rights House.

Participants of the rally sang the national anthem of Ukraine, called for immediate withdrawal of the Russian army from the territory of Ukraine and campaigned for the boycott of Russian products.  The activists held the slogans “Stop Russia”, “Hands off Ukraine”, “Bloody Putin” as well as flags of Lithuania, Ukraine, Georgia, and the national white-red-white flag of Belarus.

On the 5 March Alexander Ivanovich Udaltsov, Russian Ambassador to Lithuania, was addressed with an appeal from Tatsiana Reviaka, president of the Barys Zvozskau Belarusian Human Rights House. The appeal contains a number of demands to the authorities of the Russian Federation, on behalf of the Belarusian HRH including the following ones:

– to respect the sovereignty and territorial integrity of Ukraine, to stop military intervention in the internal affairs of that State, as required by international agreements, including the ones concluded within the framework of OSCE, a member of which is the Russian Federation;

– to refrain from the use of weapons and physical violence against the civilian population of the occupied territories, as well as against the Ukrainian troops;

– to immediately unlock the military objects of the Ukrainian Armed Forces and the Navy, as well as to return the Russian troops to their places of permanent deployment in accordance with the Kharkiv agreement on the status of the Russian Black Sea Fleet;

Another appeal to cease the military intervention in the internal affairs of Ukraine on behalf of the Human Rights Centre “Viasna” was sent to the ambassador of the Russian Federation in Belarus  Alexander Alexandrovich Surikov.

"People were charged for expressing themselves" – local policemen