This year the UK commemorates the Act of Abolition that ended the transatlantic slave trade in British territories. The 2006 Anti Slavery Award honoured modern day abolitionist James Aguer, right, for his work in freeing slaves abducted in the war in the Republic of the Sudan, coming as a timely reminder of the continuing existence of slavery in the contemporary world. There are perhaps few countries whose history has been so intricately linked to slavery, and it is not over yet. (01-MAY-07)

The receipt of the 2006 Anti Slavery Award by modern day abolitionist James Aguer, right, for his work in freeing slaves abducted in the war in Sudan comes as a timely reminder of the continuing existence of slavery in the contemporary world. 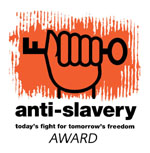 More than 14,000 men, women and children were abducted and forced into slavery in Sudan between 1986 and 2002. The civil war that raged between the Sudan government and Sudan People’s Liberation Army over 20 years fuelled the conditions that led to so many people being enslaved. The majority of abductees are Dinka from the Bahr el-Ghazal region in southern Sudan, but other ethnic groups have also been affected. There are perhaps few countries whose history has been so intricately linked to slavery, and it should come as no surprise that the practice has continued amid the decades of conflict and racial intolerance that have so decimated Africa’s largest country since independence in 1956. Sudan is a country born out of slavery.

‘Natural slaves’
Slavery has been endemic in Sudan for thousands of years. Today the Sudanese slave trade persists as a complex network of buyers, sellers, and middlemen that operates most actively when times are favourable to the practice.’ For Arab traders ‘the nation of the blacks’, or Bilad Al-Sudan, has traditionally been the source of slaves. When the slave trade developed into corporate enterprise in the nineteenth century, the slave-takers articulated distinctions based on race, ethnicity, and religion that marked the black, infidel southerners as indisputably inferior and therefore ‘natural’ slaves. Such distinctions have survived for decades and have fuelled various forms of oppression of the black south, even during those periods when slavery has not been authorised by the government. When it is authorised, as it is today, slavery then becomes the extreme form of this systemic oppression.

Many thousands of people remain in slavery
According to Aguer the last reported case of abduction was on 9 May 2002 in Gogrial county of Bahr el Ghazal, but many thousands of people remain in slavery. There are also reports of more recent abductions taking place within the context of the conflict in Darfur. The Dinka Chiefs Committee ‘braved an often extremely hostile environment to be the first to speak out against abduction and slavery in Sudan,’ says Aidan McQuade, director of Anti-Slavery International. ‘To date, Auguer and the Dinka Committee he chairs have been involved in the identification and release of over 4,000 people.’ To achieve this the Committee led negotiations with tribal leaders in Kordofan and Darfur, the main areas to which abductees were taken. They persuaded these to co-operate in order to set the abductees free. It also led the campaign within Sudan to free the abductees and, as a result, the government accepted that abduction was a problem that needed to be addressed.

Mandate to prosecute never applied
In response, the minister of justice established the Committee for the Eradication of Abduction of Women and Children (CEAWC) on 15 May 1999 to facilitate the safe return of women and children to their families. It was mandated to investigate reports of abduction and to bring to trial anyone suspected of supporting or participating in such activities. However, the mandate to prosecute has never been applied. In 2002, a presidential decree was issued to restructure CEAWC limiting its coverage to only two regions, west Kordofan and south Darfur. All other affected regions were excluded. Moreover, CEAWC and the Dinka Chiefs Committee have come under criticism in recent years as the identification and release process has been extremely slow and only a small percentage of the total waiting to be released has been freed. A comprehensive peace agreement was signed in 2005 and a new interim constitution, which criminalises slavery, was adopted.

Many have no option but to live in transit camps
However, the abduction issue has still not been fully addressed and the majority of those enslaved have not been released. Once released, there is no proper support to reintegrate returnees into their communities and to address their education and health needs. Many have no option but to live in transit camps for long periods, experiencing the harsh realities of life in the south as the region begins to recover from the lengthy war. Both the crisis in Darfur, because it has stolen the limelight from the tragedies of war in the South, and the North-South peace agreement have just about buried the unresolved scourge of slavery in the South. The negotiators of the so-called Comprehensive Peace Agreement and the warring parties clearly did not want to write into the agreement any mechanism of restitution to the victims of slavery as a war crime. Doing so, the warring parties worried, could come to haunt them as they might be held to account to this crime. But the mediators were in a bind: to insist on recompense risked the government side refusing to negotiate; and to sweep it under the carpet in the interest of keeping focus on achieving an agreement meant that the victims of the war had to be sacrificed.

Attention on Darfur has sidelined the slavery issue
Clearly, all parties chose the latter, and questions about human rights abuses were never revisited again. When Darfur happened, thousands of abductees, slaves, and IDPs, most of whom were in Darfur, particularly in South Darfur and North Darfur, became just as much victims of state violence as the Darfuris did. But no one knows what has become of the southerners, and I am afraid we won’t know until an investigation into their fate has been carried out specifically. According to Anti-Slavery International, ‘The attention on the Darfur conflict has unfortunately had the effect of sidelining the slavery issue, and it is hoped that James’s receipt of the Anti-Slavery Award will allow the problem to be raised up the public agenda.’ And as Aguer himself says, ‘Slavery is an inhuman and degrading practice which must not be allowed to persist in the twenty-first century. We must put an end to slavery. This is a moral imperative.’

A longer version of this article appears in the latest issue of Index on Censorship, ´Slavery 2007´