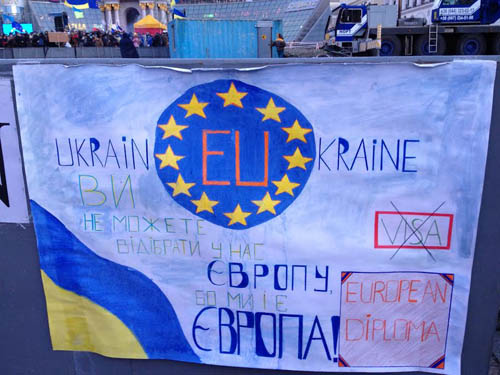 Following the violent dispersal of the demonstration of 29-30 November in Kiev, the courts are now filling up with so-called “Euromaidan” activists charged for hooliganism and with lawyers acting pro bono.

On Sunday 1 December, about 300’000 people protested against the government’s choice to refuse the wished rapprochement with the European Union and the excessive use of force by police. This protest follows an earlier one of 29-30 November, which gathered students and activists at Maidan Nezalezhnosti, Kiev’s Independence Square.

Human Rights House Foundation’s Regional Manger for Eastern Europe and Caucasus, Ane Tusvik Bonde, is in Kiev. Today she is witnessing that courts fill up with peaceful protestors charged with hooliganism. 30 activists are charged and the Information Centre for Human Rights, a member of the Human Rights House Kiev, reports that 36 journalists were beaten by the police.

The excessive use of force, the arrest of peaceful demonstrators and beating of activists and journalists, are signs that authorities aim at silencing those expressing their aspiration for change instead of ensuring public safety. The use of force in such a way is a sign of authorities unwilling to have their policies debated by citizens.

Video: Rasul Jafarov from Human Rights Club comments about the demonstrations in Kiev when it was peaceful at 1. Dec.

Call for an independent investigation

Another member organisation of the Human Rights House Kiev, the Ukrainian Helsinki Human Rights Union has called for “independent investigations on the unlawful dispersing of the peaceful protest” of 29-30 November 2013. This demonstration was peaceful, until the police intervened with excessive force to disperse it.

The Centre for Civil Liberties, also a member of the Human Rights House Kiev, is coordinating the legal aid “MaidanSOS” since Sunday night. The Centre has received around 200 phone calls during the weekend. So far, they have registered 75 complaints related to arrests, beatings and people who were temporarily taken away from the 29-30 December demonstration. This does not include clashes with the police in front of the Presidential Administration Sunday 1 December. The demonstrations are taking place throughout the country as a reaction to Ukraine’s government not to sign any rapprochement with the European Union at the European Partnership Summit held in Vilnius the 28-29 November, against the aspiration of the people of Ukraine.

Peaceful protestors assembled the last couple of days, are not to be responsible for acts of violence committed by a few. The excessive use of force by the police against so-called “Euromaidan” peaceful demonstrators is a way of holding to power and banning the expression of public distrust after the government’s choice to refuse the European rapprochement. Peaceful protest at Maidan in Kiev.

As the president of the Russian Federation Vladimir Putin is to visit Armenia, demonstrations were also planned today in Yerevan, protesting the customs union signed by Armenia’s government with Russia. Information collected by the NGO Public Information and Need of Knowledge, a member of the Human Rights House Yerevan, indicates that ahead of the demonstration, few activists informed that the police raided their apartments in Yerevan and took them to the police station without any explanation.

Rohan Jayasekera’s take on the situation

“Ukraine’s government puts on a bad show ahead of OSCE Summit,” he writes on his blog from Kiev.