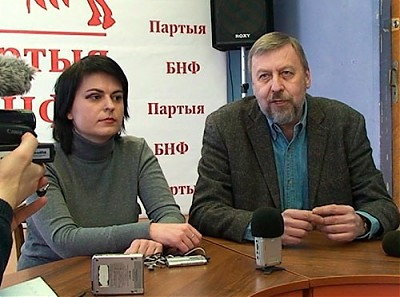 On the Day of Solidarity in the Republic of Belarus, 16 March 2010, searches were carried out in the offices of the web-site charter97.org and in the office of the independent newspaper “Narodnaya Volya”. The journalist Natalya Radzina was beaten during the raid.

In addition, searches were held in the private apartment of the leader of “European Belarus” and the founder of Charter97 Andrei Sannikov (picture on the right) and his wife, the journalist Iryna Khalip and the “Narodnaya Volya” journalist Natalya Radzina. The editor-in-chief of the charter97 web-page, Natalya Radzina (picture below), was beaten during the raid. 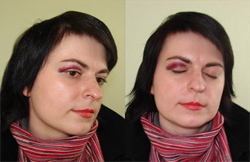 office equipment, including computers, was seized at the raid. The Norwegian Helsinki Committee condemns the raid.

Andrey Sannikov, who on 14 March announced that he will run for presidency against president Alexandr Lukashenko at next year’s presidential elections, calls the crack-down “a meaningful attempt of authorities to hamper work of one of the most popular Belarusian news site and intimidate both its workers and readers.”

Sannikov assures that the work of charter97 will continue despite the difficulties. Current events show that Lukashenkos regime is as a repressive one and not improving. In addition to the raid against Belarusian media, the trial against the political prisoner Mikalai Autokovich is in process at the Supreme Court, and the proceedings of the trials again show that Autokovich is not granted a fair trial. On the 16th of March, a Solidarity Day rally was disbanded and several protesters arrested.

Lukashenko afraid of Solidarity Day
“These events took place on March 16. It is the Day of Solidarity. Not only searches and attacks have taken place, but the trial 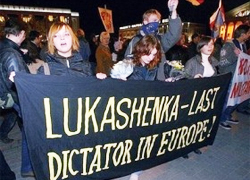 over political prisoner Mikalai Autukhovich, rallies of solidarity disbanded, people are arrested. All day long police, KGB, special services simply demonstrated how they are frightened by these days of solidarity”, said Sannikov.

According to him, Belarusian authorities started a campaign in the country against independent journalism, independent mass media, and the most popular news outlets, charter97.org web-site and “Narodnaya Volya” newspaper, “Belarusian partisan” web-site.

On the March 17th was held a press conference in which participated Natalya Radzina and Andrey Sannikov. Here you can read the whole story or watch the video (Russian, Belorusian). An interview with Radzina is available here.

“Narodnaya Volya” (translated as People’s Will) is Belarus’ largest independent newspaper. The newspaper was founded in 1995 and originally printed in Vilnius, in 1997 printing was moved to Minsk. In 2008 “Narodnaja Volya” was banned from BelSoiuzPechat (government-run distribution network) and is now distributed independently.

Charter97, as a citizens’ human rights organisation based around the principles outlined in the declaration calling for democracy in Belarus (Charter 97), is a non-partisan organisation which has organised protest rallies and has provided a springboard for other democratic movements in the country. It also maintains a website of news with a focus on human rights developments.