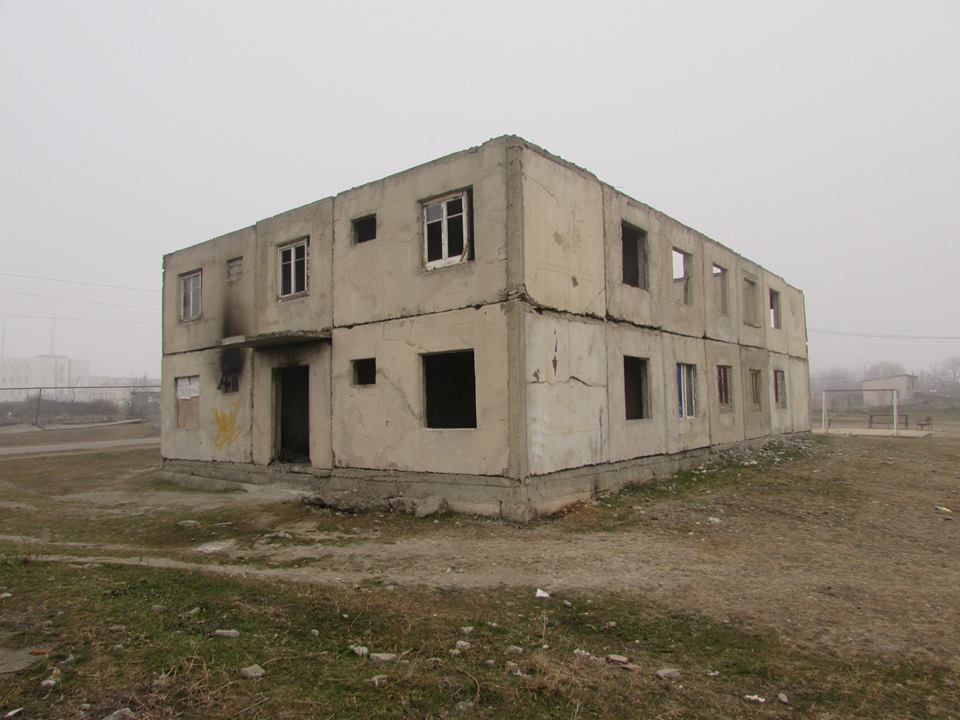 In accordance to the special report of Public Defender of Georgia, Right to Adequate Housing, 9 805 families have willfully occupied 401 buildings in Tbilisi. Among them, 4 170 families have already legalized their flats, 5 635 families continue living in the buildings without any legal grounds. The majority of the citizens willfully living in these flats are socially vulnerable people. One part of the buildings, where citizens willfully live now, belongs to the state; another part has private owners. What does the government do to eradicate the problem of homeless people and to provide socially vulnerable citizens with adequate housing?

An abandoned building is located in Khvedeliani Street 2 in Alekseevka settlement, in the outskirts of Tbilisi; the construction of the building stopped around 20 years ago. The two-storey building has neither windows and doors, nor floor and roof. Ekaterine Gulishvili and her husband Badri Kobulashvili willfully occupied a space in the unfinished building four months ago. Before that, they rented a flat for 15 years. They had changed living places together with their six children several times; they cannot afford the rent of 200 lari and decided to enter the half-constructed building. “I found out at the Ministry of Justice that the building did not belong to anybody; it was neither private nor state property. So we came here; I took social allowances for several months and arranged the room with that,” Ekaterine Gulishvili said.
In Khvedeliani street #2 three socially indigent families live now. All of them have different stories and their problems have different reasons. Lusia Gasoeva said she sold her flat in Airport Settlement to fund medical treatment for her son; she sent him abroad for medical treatment and became homeless. “After my son went abroad, I stayed in the street. I spent nights at my friends’. Finally I decided to enter here because there was no other choice. I urge the government to supply this building with water, electricity and sewerage system; we will take care of other utilities,” Lusia said.
Willfully settled families live in unbearable conditions. They lit the several square meters rooms with oil lamps; they collect firewood for the winter in the yards. “At the end of the month I have to empty the flat I´ve been renting. I cannot pay the rent anymore. I have a loan at the bank; I took social allowance and pension of my disabled child for several months together in advance. The district administration offered me to pay the rent but it is a temporary process and I cannot accept it. I do not want to die without leaving behind a flat for my six children,” Eka said.
In accordance to the information provided by the Public Registry National Agency the building located in Khvedeliani Street # 2 is not a state property. Will the accommodations be registered on the people willfully occupying the spaces in the building or will the state offer them alternative housing? We received the following answers to these questions from the Isani-Samgori district administration. “We would like to notify you that Tbilisi Isani Samgori district administration relies on the Resolution N 189 of February 20, 2014 of the Government of Georgia “about the rules on assigning the non-privatized living and non-living (isolated and non-isolated) spaces to the legal owners for free”. Consequently, the citizen should submit the documents required by the aforementioned resolution to the Samgori district administration in order to enable us to assign the space to the applicant for free.”
In 2014, Human Rights Educational and Monitoring Center (EMC) conducted the survey “Non-recognition, Inactivity and Repression Substituting Home” to study the human rights situation of the socially indigent homeless families willfully living in state ownedbuildings in Tbilisi and the state policy regarding their problems.
EMC social program officer Lina Gvinianidze said the February 20, 2014 resolution # 189 of the Government of Georgia refers to completely different circle of people and it cannot cover the cases of willful occupation of spaces since 2012.
In accordance to the special report of Public Defender Right to Adequate Housing, “over the years homeless persons willfully settled in the state owned and private buildings, which was stipulated by the occupation of territories of Georgia, natural disasters and/or extremely poor social-economic conditions. After the Parliamentary Elections of 2012, the cases of illegal settlement in state owned and private buildings by the homeless and socially vulnerable persons became more frequent. Cases studied by the Public Defender’s Office determined that occupation of such buildings was carried out by groups of several families, which had addressed the local government units with shelter requests several times already but due to lack of adequate resources their requests were denied.”
Besides the capital, another problematic region in terms of willful settlement in abandoned buildings, is Adjara. Lina Gvinianidze explained the increased number of willful settlements in state owned or private buildings as follows: “People get homeless because of systemic problems caused by ineffective social welfare and healthcare systems. In most cases their homelessness is connected with economic indigence and poverty.  Women, which get divorced, often get homeless because they do not have alternative accommodations and cannot keep families alone; it is related with the problem that women do not get inheritance from their parents and from husbands after a divorce.”
In accordance to the study of the EMC, the state’s policy on fighting homelessness is both non-systematic and non-effective: with the support of MIA the willfully settled people are either forcibly evicted from the buildings or are deprived of social aid, which means they are left without substantial minimum.
“The State does not admit the problem of these groups on policy level and does not have a consecutive approach to their needs. These families live in unbearable conditions in occupied buildings and permanently face the threat of eviction. The state does not ensure alternative accommodations for them and does not take measures to meet their basic needs while they live in these buildings,” said the EMC representative.
Public Defender of Georgia and nongovernmental organizations call on the Government to acknowledge the problem of homelessness in the country, to estimate the scope of the problem and to develop relevant legislation and state policy whose implementation will be the responsibility of different state institutions.