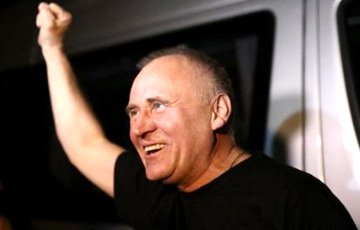 Human rights defenders welcome the release of the political prisoners

On 22 August it was reported that Aliaksandr Lukashenka pardoned six political prisoners, however human rights defenders call on the authorities to take steps for further improvements in the field of human rights.

On 22 August six political prisoners were suddenly released: Mikalai Dziadok, Ihar Alinevich, Mikalai Statkevich, Yauhen Vaskovich, Artsiom Prakapenka and Yury Rubtsou. The report noted that the decision to pardon them was guided by “principles of humanity”. It is still unknown, if the convictions of the released political prisoners were removed from the official records, however, this question remains quite important: without this step there is a possibility of their return to the prison.

Mikalai Statkevich (right), who was imprisoned for almost 5 years, is the only one of all the political prisoners released on 22 August, who has a note “subject to the supervision” on his certificate of release. It is now known that the politician will be under preventive supervision of the police for 8 years, which means he is obliged to report to the police on the first call and has no right to leave permanent place of residence for more than 30 days.

“Both the Belarusian and the international human rights community, as well as the EU and the United States have for a long time demanded the release of political prisoners. The Human Rights Center “Viasna” welcomes this step of the Belarusian authorities, but stresses that not all political prisoners have been released today. We should not forget about the three young men who, in our opinion, were wrongly detained and are being held in the Minsk-based detention center No. 1 on Valadarsky street. We view their groundless persecution as politically motivated harassment. Apart from that, we would like to hope that the release of the six political prisoners will be the first step towards improving the human rights situation in Belarus,” – noted Valiantsin Stefanovich, human rights defender and Deputy Chairman of the Human Rights Center “Viasna”.

At the same time, the human rights defender noted, that the very essence of the Belarusian authorities has not changed. According to Stefanovich, the repressive mechanism, which has been developed by the state, the repressive laws and practices still remain unchanged. As an example, he cited the persecution of freelance journalists, the presence of legal acts that are directly contrary to international standards of human rights, e.g. criminal article 193-1 providing for responsibility for activity on behalf of an unregistered organization.

“Such a situation allows the emergence of new political prisoners. It is therefore very important that more steps were taken to improve the situation with the basic civil and political rights – freedom of speech, freedom to receive and disseminate information, freedom of association, freedom of peaceful assembly, freedom of conscience, and so on,” – highlighted Stefanovich.

Statkevich – political prisoner, who is planed to be put up as a presidential candidate