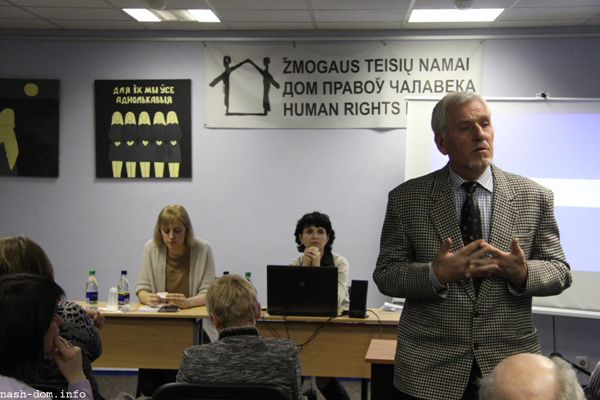 December 19 once again recalled in Vilnius

On 16 January, Belarusian Human Rights House in conjunction with the Human Rights Centre “Viasna” and the civil campaign “Our Home” presented the book, calendar, children’s colouring book, postcards, and a number of video clips dedicated to the participants of 2010 Ploshcha – a peaceful protest that took place in Belarus on 19 December, 2010 against irregularities that occurred during the presidential elections in Belarus.

In the first part of the presentation in the Human Rights House a book by Belarusian journalist Aliaksandr Tamkovich “Against the Current,” published with

the support of Human Rights Centre “Viasna”, was presented. The book of Aliaksandr Tamkovich describes 18 life stories of the Belarusians who were imprisoned after the protest on 19 December. The 19th story was told to the participants of the presentation by journalist Natalia Radin (left):

According to Aliaksandr Tamkovich, most of the people whose stories appear in the book, were not known before the events of “Ploshcha” 2010. Heroes of the book – the participants of 2010 Ploshcha, convicted on criminal charges, some of which are still behind bars, and some – already at large.They are different – the poet Uladzimir Niakliayeu, professor Anatoly Paulau, politician Mikalai Statkevich who celebrated major anniversaries, and very young Fiodar Mirzayanau and Mikita Likhavid, and tempered in fierce ideological battles Anatoly Liabedzka and Pavel Seviarynets. {0}They all were united in their belief in justice, love to their Motherland{/0} {0}, willingness to fight for truth and the future.{/0}

One of the youngest heroes of the book Mikita Likhavid noted that behind bars he realised that Belarus is one big prison.

“Belarus – is a prison, believe me, I saw it. Prison is a small community where someone has everything, and someone – nothing, where people are willing to get power at any cost . It is the same in Belarus, it is one large colony, “- said Likhavid.

“Be careful, the police” in Vilnius

The second part of the event included presentations of postcard , children’s colouring book “My father – a policeman.What he does at work” and a video dedicated to the 13 women affected by the events of 19 December, 2010, who were put in the same cell as a result of dispersal of a peaceful demonstration. The clips raise the issue of women’s solidarity, as well as a spe

cifically “female” problems in prison and male policemen treatment of female demonstrators. The head of the civil campaign “Our Home” Volha Karach (right) talked about the campaign “Be careful, the police,” which were presented during the event as well:

– A man who works as a policeman has two lives: the first one – where he is a caring father and family man, the second one – at work, where he can allow himself to beat and sexually harass women.And we want to talk about this second life as it is seen by the victims of police violence.

***
A year ago, on 19 December 2010, Belarus held presidential elections, which were accompanied by numerous violations of election laws and did not meet international standards. In the evening, thousands of people gathered for a peaceful protest against the election fraud. The demonstration was brutally dispersed, and more than 700 people, including presidential candidates, were beaten up, arrested or fined. That day, an unprecedented wave of politically motivated repression began in Belarus, manifested in massive searches and seizure of equipment, prosecutions and long prison terms for those who dared to protest.

December 19 – year after the elections

Action of solidarity with Ales Bialiatski held in Vilnius