Home
/
Latest
/
Belarusians detained and beaten up for silence 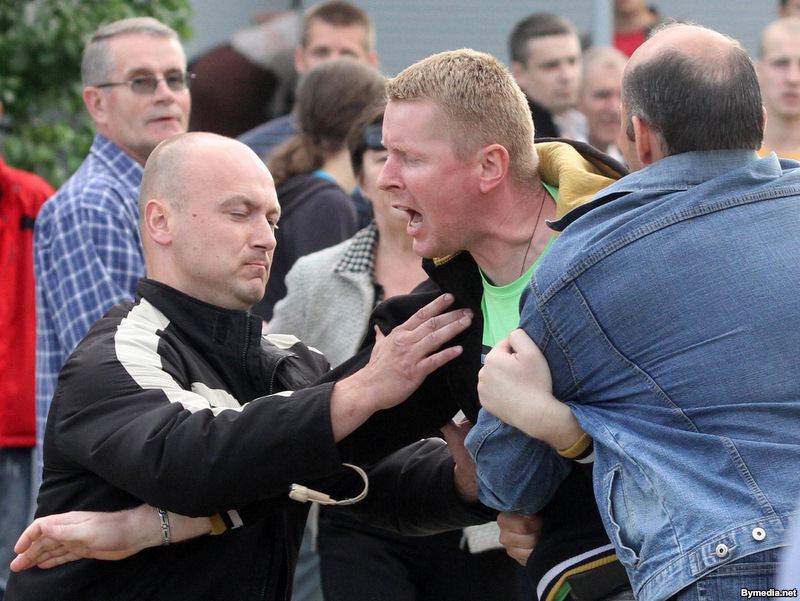 Belarusians detained and beaten up for silence

Silent protest actions in Belarus end up with beating up and arrests of peaceful citizens and journalists. After the nation-wide action held on 29 June, more than 300 people were detained. Such an inadequate reaction to peaceful protests was condemned by the international community.

The silent protest actions that had become a tradition in Belarus  this time were held on 29 June. The activists of internet-community “Revolution through social networks” have made a suggestion to meet and walk around central squares of cities and towns every Wednesday at 7 PM. The idea was to meet friends, get acquainted with new people to see the real number of those who demand political and economical changes in Belarus.

The actions soon became popular, despite the government pressure on internet-activists. Now, every Wednesday the authorities try to organise some entertainment events on main squares of the cities in order not to let the protesters there.

Silence muffled by “youth concerts”
On 29 June, the October square, the place

of the planned actions, was cordoned off by police. This time the city authorities organised here a concert and a disco. In spite of bad weather, the square was filled with young people, mostly the member of pro-Lukashenka BRYU (Belarusian Republican Youth Union).

The students were obliged to come there for a concert. It is important to note, that the concert was organised right near the spot of April 11 terrorist act, that took lives of 15 Belarusians.

Uladzimir Kubyshkin, the producer of performers that appeared on the stage of October square during the arrests of protesters, comments on the situation: “They’ve called us and said that we must be here, and we came. If we had done otherwise, we would be excluded from the society, and forced to go undeground. And we cannot allow that to happen.” 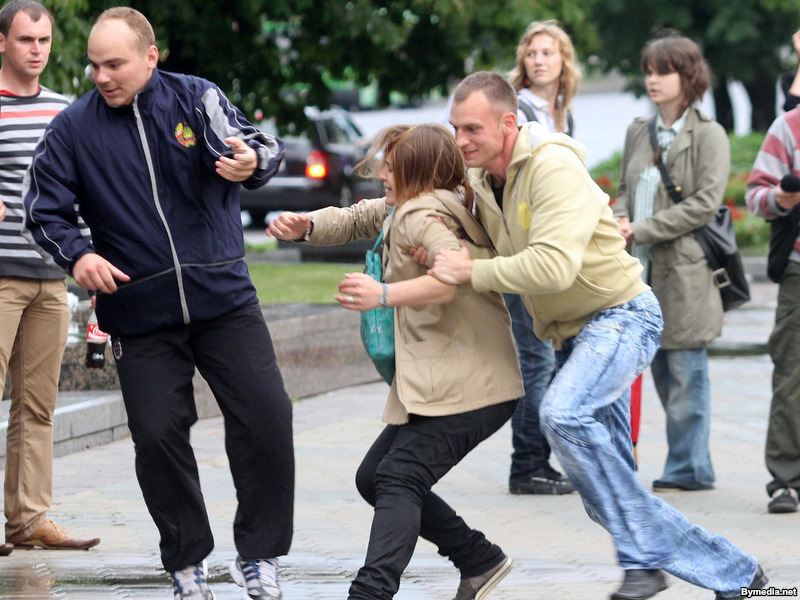 Minsk protesters were detained without any formalities by plain-clothes men, that didn’t have any police badges or other insignia. The people were simply seized in the streets and dragged to the prepared buses without numbers.

The police version
The Ministry of Internal Affairs, had its own version of the event that took place in Minsk and other cities on 29 June. According to MIA from 6 PM till 8.30 PM October square hosted the “Young Belarus” action that was organised by the BRYU and Minsk City Council.

Approximately at the same time (7 PM) the groups of citizens (30-70 people) started to gather near the square.

“During the movement of the groups, other citizens joined them. They didn’t have any emblems or other attributes, but shouted out insults in obscene language addressing police officers. They did not react to explanatory conversation, impeded the passage of pedestrians on the sideways, made noise and brought attention of by-walkers with clapping, pushed the police officers, walked on the traffic area” – states the MIA web-site.

Silent actions as a threat to Lukashenka

Aliaksandr Lukashenka (left) has also commented on the silent protests saying that the protesters are simply used in “dirty political games and provocations”.

“Clapping, stamping, mooing or growling on the streets and squares will not solve the problems, and most importantly will not get money. And all of those who moo and growl on the squares – we’ve examined them – are not poor people. So what do they want? They want anarchy and chaos in the country. We cannot allow that to happen. The state has the resources and strength to put down those who violate the law and the Constitutions” – said Aliaksandr Lukashenka.

end to repressions against journalists. Dunja Mijatović (right) condemned the dispersion of Minsk silent protest held on 29 June by the police. No less than 12 journalists were arrested that day along with the protesters.

The letter of OSCE Representative on Freedom of the Media Dunja Mijatović addressed to Lukashenka says about the need to protect every journalist from persecution, intimidation, humiliation and violence from the side of law-enforcement authorities, about the necessity to provide normal conditions of their work.

On 1 July, Secretary-General of the Council of Europe Thorbjørn Jagland (left) also condemned the detentions of peaceful silent protest participants, that took place in Belarus last Wednesday and said that “We cannot have the close contact with the regime that puts journalists in prison. We should not isolate Belarus, but we must find the way to communicate with the Belarusian society.”

The Amnesty International has criticized the

“The Belarusian authorities must respect the freedom of assembly of those wishing to protest peacefully.  It is unacceptable for police to use excessive force against peaceful demonstrators” – said John Dalhuisen, Amnesty International’s Deputy Director for Europe and Central Asia.

The international community puts pressure on the Belarusian regime

Media as a scapegoat for economic crisis in Belarus