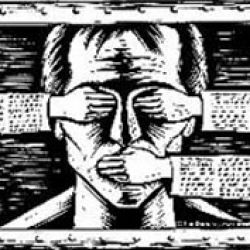 On the eve of World Press Freedom Day, Freedom House has published an annual report where Belarus was once again among the worst countries in the world in the field of freedom of speech. The organization “Reporters Without Borders”, in turn, condemned the persecution of Belarusian journalists.

Published: May 9, 2013 Author: Belarusian HRH based on svaboda.org, baj.by

Belarus, together with Equatorial Guinea, Eritrea, Iran, Cuba, Uzbekistan, Turkmenistan and North Korea were rated in the range from 90 to 100 points: these are the countries where the media either does not exist or works in very difficult conditions, where the media is a mouthpiece of a regime and citizens’ access to unbiased information is strictly limited.

Chairman of the Belarusian Association of Journalists Zhanna Litvina (left) believes that it is not only about cruel persecution of independent journalists and pressure on the independent press: “Unfortunately, freedom of speech, freedom of expression is not a real value to the society itself.It is important and necessary for us to formulate the role and place of media in our society again and again, to get rid of the idea that it is part of the propaganda machine, part of the ideological apparatus. How to challenge this stereotype? Without that, apparently, you can not expect that the society will increase the demand for quality media product. “

No political action in Belarus is organised without detentions of journalists. The latest evidence of this – the detentions in Astravets and the Chernobyl way action, when the journalists if Radio Racja Henadz Barbarych and Aliaksandr Yarashevich were convicted to three days in prison.

The leaders on detention are the journalists of the independent television channel Belsat. Mikhas Yanchuk, the representative of the channel in Belarus comments: “Television is forced to work almost in underground conditions that are making journalists to be on the front line. Our way too nervous policemen are catching them first. As our journalists do not have the the editorial certificates and accreditation they often go for several days in prison, they are convicted and their equipment is confiscated.”

Traditionally, the Belarusian Association of Journalists, sums up the result of competition “Free Word” on the World Press Freedom Day. Many of the works of Belarusian journalists meet the highest international standards, says the chairman of the jury Yuras Karmanau:

“In fact, there are no taboo topics for Belarusian journalists.The competition jury received more than a hundred works from 56 journalists. Technical level has significantly increased. Most works sent for the contest included not only photos, but also video reports. Multimedia is becoming a good taste in modern-day Belarusian journalism.”

the arrests of journalists during the “Chernobyl Way”

Journalists’ rights organization condemned the arrests and detentions of independent journalists on 26 April .“The media once again became involuntary victims of the Lukashenko regime of zero tolerance to the civil society and the opposition. Journalists of Radio Racja were doing their job, covering the socially significant event and the police had no reason to intervene “- note the “Reporters Without Borders “.

Also on 3 May, on the World Press Freedom Day, the organization “Reporters Without Borders” published its annual list of the “Predators of Freedom”, which also named the Belarusian leader Aliaksandr Lukashenka.

"Chernobyl Way": authorities promised to prevent arbitrary detention, but did not keep their word

The film "Torture in Belarus. Apocalypse": not just complaints and emotions, these are broken lives