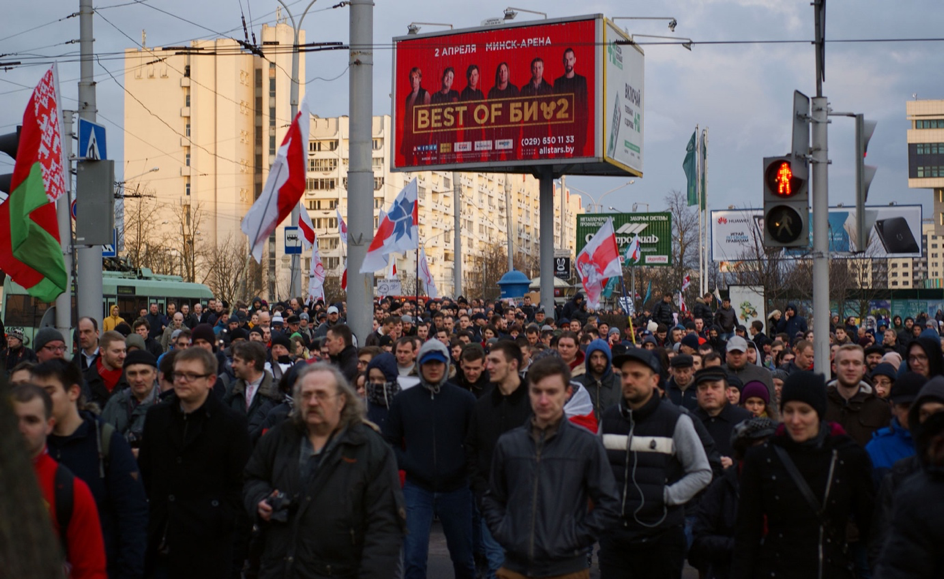 Updated 27 March: As protests continue in Belarus, the President of Belarusian Human Rights House Tatsiana Reviaka was detained on 26 March along with 9 other people, at Kastrychnitskaya square. Tatsiana Reviaka has now been released.

The human rights center Viasna reported that several hundred people have been detained during a protest in central Minsk Saturday. These include dozens domestic and foreign journalists. Some reporters were soon released. Other detainees have been brought to various police departments.

The crackdown on Freedom Day demonstrations was marred by extreme brutality. There were hundreds of riot policemen, including wearing guns, water canons and military vehicles. Many protesters were reportedly beaten.

Leading up to the planned peaceful protests on Belarusian Freedom Day human rights defenders have been detained and the office of the human rights organization Viasna has been raided. HRHF calls for the immediate and unconditional release of all still detained related to protests, and for all charges against them to be dropped. Peaceful protest and observing protests is no crime. The right of citizens to protest today in Belarus must be respected.

Among the human rights defenders detained before the protests on Saturday was Aleh Hulak, chairman of the Belarusian Helsinki Committee, as well as Masha Chichtchenkova, Front Line Defenders Protection Coordinator. According to Front Line Defenders, staff of the Human Rights Centre Viasna and other human rights defenders were detained, put onto a bus and brought to Pervomaiski department police station. They have recently been released.

“The targeting of those who monitor the protests, especially human rights defenders, the arrests ahead of the protests, and the massive police presence creates a climate of fear and tension, said Florian Irminger, Head of Advocacy at the Human Rights House Foundation (HRHF). “One can already see that the authorities do nothing to protect the right to protest peacefully and instead use repression and violence to shut down dissent.”

Belarusian president Alexander Lukashenko has warned that his security forces will take “the most severe” action against any unrest, as the country braces for potentially its biggest anti-government protest since the December 2010 protests. He has shown that he means it in recent days, regardless of whether the law violates international human rights standards, as the authorities have escalated their repression against protestors, in terms of both the number of those arrested and the charges brought against them.

Ahead of Freedom Day, Belarusian human rights organisation Viasna reported that around 300 people had been repressed for participating in peaceful assemblies since 3 March, and more than 100 of them were subjected to administrative detention, up to 15 days in prison, for participating in an assembly without notification.

These protests, which follow an outcry against a law imposing a tax on unemployed Belarusians, have been announced on social and traditional media and have been ongoing for almost a month. “This could be seen as notification of the protests, but instead it is seen as a provocation that should be harshly repressed, added Florian Irminger. “The authorities duty is to enable and protect peaceful demonstrations. Their actions show that they aim at provoking violence, especially by targeting those who advocate peaceful action, such as human rights defenders.”

Marking a serious escalation, by 23 March, the authorities had arrested 26 people on charges of “preparing for mass riots,” which carries a sentence of up to three years in prison. This, together with a KGB statement that more detentions were possible in the near future, shows the authorities’ intention to crack down harshly on peaceful protestors, treating them instead as rioters. “Participating in riots” carries a sentence of three to eight years in Belarusian prison.

The European Union and other members of the international community have sought to improve relations with Belarus this past year, despite no signs of meaningful improvement in the human rights situation in the country.

In the aftermath of Presidential elections in Belarus in December 2010, the authorities arrested more than 600 people and hundreds were beaten as part of a crackdown on demonstrators, journalists, human rights defenders, and opposition candidates.

Belarusian Freedom Day on 25 March is often marked by demonstrations against the government of President Lukashenka.

The Belarusian Human Rights House (HRH) addresses the main challenges faced by human rights activists in Belarus – the right to assembly and freedom of expression. This is achieved through the provision of a safe training and meeting space and facilities for human rights defenders, NGOs, journalists, students and teachers, as well as for international meetings and cultural events. Read about and news from the organisations: