1 July 2010 will mark a new era for Belarusian internet users. Many internet websites may be blocked. On that day, regulations prepared by the Ministry of Communication and Information will come into force, concerning material that contradicts law – pornography, extremism, terrorism, etc. Experts say the new regulations can affect sources that may pose a threat to the authorities.

According to the regulation text, two lists, a white and a black one, will be made. The black list, with limited access to society, will be open only to the security police, tax authorities, courts, and other authority 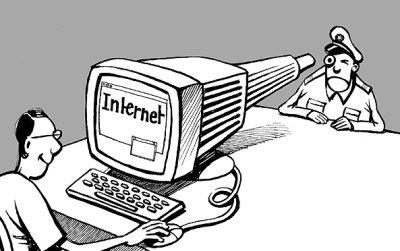 organisations. The list will be made by the Ministry of Communication and Information.

Black and white lists
The open white list, on the other hand, will contain sources without access restrictions. The list is also going to be made by the same ministry.

Experts estimate that not only websites but even parts of them can be blocked in the future. So-called web content filters will be used. And another thing to worry about is a procedure of inclusion of websites into the black list. Even a complaint by an individual can cause a website’s disappearance from the white list. The deputy chairman of the Belarusian Association of Journalists Andrey Bastunets says it is a clear violation of freedom of expression.

According to him, an appeal against such a decision may be brought before a court but not vice versa. Normally, decisions by authorities should be made only by adjudication. This practice contradicts Article 19 of International Covenant on Civil and Political Rights ratified also by Belarus.

Chinese style censorship
The introduction of the black and white lists is not the only news. Presidential Decree Nr. 60 “About the Measures on Improving the Use of National Segment of Internet Network” contains provisions to control internet users. In 2009, the President stated that the identity of each web user should be traced and stored, in case of necessity. Decree Nr. 60 realizes his wish.

y new rules and regulations for Internet users and providers. Experts note that the text is unclear, different interpretations of statements are possible. It could have been done on purpose, so that anyone could be accused of breaching the law.

The Belarusian political scientist Valery Karbalevich says authorities create such conditions in which it is virtually impossible to avoid violations. Belarusian internet commentators reiterate his concern, and say that, with this new decree, everyone can be accused of being an offender in ten minutes. As Aliaksandr Klaskouski, a journalist from the popular news website www.naviny.by writes in his article “Belarusian internet in chains: doesn’t it hurt?”, the militia is going to tell one thousand and one fairytales about scary paedophiles and bombers in the net to excuse Draconian laws.

“First of all, the internet is annoying all kinds of watchdogs. It looks like they have persuaded the President to introduce new law for internet users before the forthcoming president election. Westerners will make noise and then calm down. However, in Belarus even the internet will be under control”, notes Klaskouski. According to the requirement outlined in Provision Nr. 664 of the Belarusian Government “About Some Issues on Improving the Use of the National Segment of Global Web Network of Internet”, adopted on 29 April 2010, all websites hosted in Belarus will have to get officially registered by 1 July 2010. The document was adopted, following Presidential Decree Nr. 60. The governmental provision states that providers shall be made responsible for administrating the official registration of the networks.

Criminal penalties
This President’s decision has provoked discussions among the internet users in Belarus on how to avoid possible restrictions and control on the internet. They are speaking about web anonymizers, proxy servers, Tor system, etc. Yet, the official Minsk authorities are going to introduce sanctions for such ‘offenders’. Ministry of Communication and Informatization issued an official comment on Decree nr. 60 in May. According to it, a new draft law is being prepared. It aims to introduce administrative, criminal and other penalties in case of violating the Decree.

This means that an internet browser who wants to stay anonymous in the web is breaking the law and can be punished severely.

Experts assume that the new law is likely be exercised only formally like many other inhibitory laws in Belarus except in cases when President Lukashenka or senior officials are criticized.

Wave of social activity
However, the new rules seem to have brought at least one positive result, too. The Decree nr. 60 has provoked masses to organize themselves. In that way, the Decree actually serves to crystallize and engage civil society in Belarus.

The website ukaz60.net is one of the new initiatives that have come up. The site fights against the in 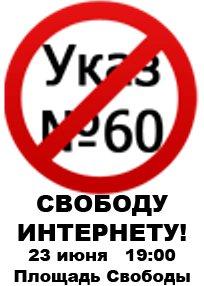 troduction of new regulations. In addition, activists collect signatures for an appeal to the government, and Belarusian internet businessmen have created a civil organization to protect their corporate interests.

Towards a police state
The introduction of a Chinese style firewall in Belarus will not increase the authorities’ popularity. Youth are the most likely to oppose the decisions coming into force on 1 July 2010.

The new Internet regulations add to a long tendency of initiatives, all serving to bring Belarus ever closer to becoming a police state. It is also obvious that the government understands it is pushing society too far. A state official recently said that people should not worry because personal web mail accounts will not be registered. It sounds similar to the words of a policeman who puts an offender in chains and asks him whether they hurt him too much.

In February 2010, the civil organisation ‘Speak the Truth’ was set up. In a few months, it had managed to capture the country’s attention with its original and offbeat actions. Needless to say, it soon also became a target of the authorities. On 18 May, police descended on the homes of members of this and other civil society groups in several cities across the country, including the ‘Speak the Truth’ head office in Minsk.

Find out more about the topic here, here and here (Russian) or here (English).

The ‘inconvenient’ Truth: meltdown in Belarus

10 tactics on how to defend your rights