Today, Aminatou Haidar, the Saharawi human rights defender, received the 2008 Robert F. Kennedy Human Rights Award for campaigning for the self-determination of Western Sahara and against government abuses and disappearances of prisoners of conscience.for her human rights work. Read here the address that she gave at the award ceremony and reception at the US Senate in Washington DC.

Distinguished guests, Ladies and Gentlemen, Dear friends, allow me to thank the Robert F. Kennedy Center for Justice and Human Rights for uniting us during this event to commemorate together the virtues of a brave man who devoted his life to the fight for freedom and the promotion of human rights. We pay a great tribute to the spirit of Robert Francis Kennedy.

“Each time a man stands up for an ideal, or acts to improve the lot of others, or strikes out against injustice, he sends forth a tiny ripple of hope, and crossing each other from a million different centers of energy and daring, those ripples build a current which can sweep down the mightiest walls of oppression and resistance.” Those were the words of Robert Francis Kennedy, and as the 2008 human rights award is bestowed upon me on his behalf, I find myself inspired by the same ideals he defended with such conviction and selflessness. I have to tell you that as Robert Francis Kennedy, I believe that “all can freely speak and act to share in the decisions which shape their lives.” Moreover, I share his belief that the fight against injustice is the highest form of courage.

My people, the Sahrawi people, have greatly suffered from the consequences of an unfair war waged since 1975 by the Moroccan state against their will. Today more than half of my people live in Diaspora, sometimes in very difficult conditions, far from their country and their families, while the other half continues its heroic pacific resistance against the Moroccan occupation. More than 500 Sahrawis have been declared missing since the Moroccan invasion of Western Sahara and the Moroccan state still refuses to give information regarding their status although it conducts propaganda campaigns under the guise of a so-called truth commission, an organization that is supposedly for equity and reconciliation and that runs around the world without giving any real answers on the grave violations of human rights perpetrated against the Sahrawi population.

Since May 21, 2005 a non-violent uprising of the Sahrawi population started, proclaiming its right to self–determination. Since then, wherever there is a strong concentration of Sahrawi, demonstrators have gathered in public squares or on university campuses chanting slogans proclaiming their right to self-determination and waving Sahrawi flags. This is always dangerous for the demonstrators who risk being hit by police batons or even torture, which sometimes leads to death as was the case of three young Sahrawis: HAMDI LEMBARKI, BACHAIKH LAKHLIFI and SIDHA ULD LAHBIB or leads imprisonment for up to fifteen years as is the case of the Sahrawi human rights defender YAHIA MOHAMED LHAFED or can even lead to becoming disabled for life as was the case for the Sahrawi students SULTANA KHAYA who lost her right eye and LWALI QADMI who became paraplegic after being 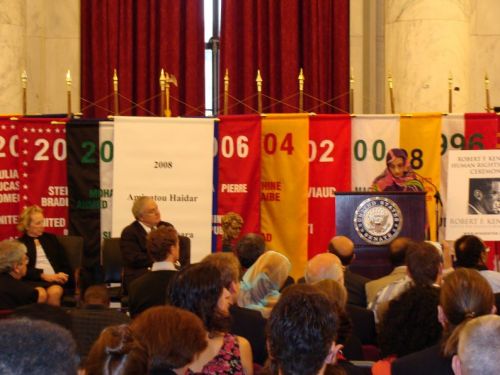 subjected to the brutality of the Moroccan security forces. Not to mention the daily ransacking of homes and the constant intimidation and harassment campaigns against the Sahrawi human rights defenders including arrest on the grounds of human rights activism, the loss of jobs, the prohibition of free movement and more importantly the systematic prohibition to form human rights organizations such as the COLLECTIF DES DEFENSEURS SAHRAWIS DES DROITS DE L’HOMME ‘‘CODESA’’ of which I am President and which is still banned by the Moroccan administrative authorities and the ASSOCIATION SAHRAWIE DES VICTIMES DES VIOLATIONS DES DROITS DE L’HOMME ‘‘ASVDH’’ which is also facing the same fate.

Ladies and Gentlemen, as a Sahrawi woman victim of the Moroccan repression, subjected to forced disappearance and arbitrary detention, and also as a human rights defender, I reaffirm today that the current situation of human rights in the occupied territories of Western Sahara is tragic and continues to deteriorate on a daily basis. I bear witness to the distress of the Sahrawi population, and call for the protection of their basic rights. It is urgent, it is imperative to renew efforts and intensify the work required to put an end to our suffering.

It is widely known that the Western Sahara conflict primarily affects the prosperity of both the Sahrawi and the Moroccan people. It also affects the rest of the Mahgreb and the hopes of its people. The time has come to put an end to the unbearable sufferings that this situation is creating for the population. Shouldn’t the Sahrawi people, in all fairness, benefit from an international protection against the cruel repression that they are being subjected to? How long will the international community maintain its regrettable non-interference approach while a whole people sees its right to self-determination be trampled underfoot by foreign occupation? The time has come to uphold real commitments in order to accelerate the process toward self-determination.

The Office of the United Nations High Commissioner for Human Rights visited Western Sahara May 15-19 2006 and confirmed in its report that all human rights violations committed by the Moroccan authorities in Western Sahara stem from the denial of a basic right according to the UN, namely the right to self-determination of the Sahrawi people, an inalienable and perpetual* right.

A fourth round of negotiations between Sahrawi and Moroccan leaders recently took place in Manhasset under the auspices of the United Nations and a fifth round is expected. However, the prevailing feeling among the Sahrawi people, even the most optimistic, is that these discussions seem to remain unsuccessful which unfortunately gives rise to disappointment and a lack of hope in the Sahrawi people .

Less than two years from the deadline for the completion of the plan of action of the Second International Decade for the Eradication of Colonialism, which was set in 2010, the Sahrawi people are still expecting to receive the support of the international community and to see the United Nations play an active role in seeking a just and equitable solution to this tragic conflict.

Allow me as I stand here, on behalf of all Sahrawi human rights defenders, to urgently call upon the international community and particularly the United States to do all they can for the protection of the Sahrawi citizens under Moroccan occupation. I would also like to take this opportunity to remind you that about forty Sahrawi political prisoners (among them human rights defenders) are still behind bars in Moroccan jails and in the infamous El Aaiun prison. They are living in deplorable conditions, mistreated and deprived of their basic rights; their only crime is to have defended the right to self-determination of their people.

These prisoners need our support and solidarity so that they can find their freedom. Let us therefore together demand their immediate release and demand information on the fate of the Sahrawi missing since 1976.

In conclusion, I find myself once again reminded of the hopes of ROBERT FRANCIS KENNEDY who believed that the influence enjoyed by the United States in the world should be used in support of peace and justice. He said and I quote: “…The great challenge to all Americans…is to maintain loyalty to truth; …to maintain loyalty to freedom as a basic human value, and … to keep in our hearts and minds the tolerance and mutual trust.”

Finally, I would like to dedicate this prestigious award to the Sahrawi political prisoners, the victims of the Moroccan repression and to the Sahrawi human rights defenders who are performing a noble task and enduring innumerable sacrifices in defending the rights of others.