Home
/
Latest
/
A demand for justice and the end to impunity 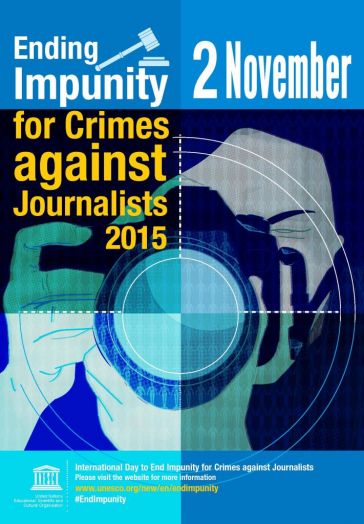 A demand for justice and the end to impunity

The Human Rights House Network marks November 2nd, the International Day to End Impunity, by demanding justice for all journalists who have been killed because of their work, and calling for the removal of impunity to create safer environments for journalists to operate in.

Since 2006, over 700 journalists have been killed pursuing their profession, with an average of one journalist dying every five days. The rate for resolving cases of killed journalists remains shockingly low, with 90% of cases going unpunished.

Statistics like these only serve to encourage criminals, who know they are unlikely to be brought to justice, to continue to tighten their grip around the throat of free expression.

“These numbers illustrate the personal dangers of being a journalist, and impunity for crimes against them infect whole societies with fear of reprisals and self-censorship. This weakens democracies and deprives the population of the balanced information they need to make choices. In several countries, there is a higher chance of going to prison for being a human rights defender than for murdering journalists. In cases like this, where states are unwilling to deter these killings, impunity is silencing the voice of free press,” said Ane Bonde, Regional Manager, Eastern Europe and Caucaus, HRHN.

Not included in the above statistics are non-fatal attacks on journalists, which include torture, disappearances, arbitrary detention, intimidation, and harassment on a daily basis, with women journalists being particularly vulnerable to sexual attacks.

Several journalists associated with HRHN have been killed and their cases remain unresolved.

Rasim Aliyev, an Azerbaijani journalist and civil society activist, was fatally beaten in August 2015, a week after criticising a prominent footballer. He had long been a government target for threats, intimidation, and violence.
Timur Kuashev, an independent Russian journalist and correspondent for DOSH magazine in the North Caucasus, was found dead in a forest on the 1st of August 2014 after going missing the previous day. This occurred following threats from law enforcement officials.
Natalia Estemirova, an award-winning human rights activist and journalist was abducted from her home in Grozny, Chechnya on the 15th of July 2009, and was found dead later in the day.
Elmar Huseynov, the editor-in-chief of Russian language magazine Monitor, was gunned down in 2005 in the stairwell of his apartment building in the Azerbaijani capital Baku.

“We will continue working for a safer environment for courageous journalists covering topics and generating information essential to an informed public and a healthy democracy. In this work, it is imperative to end impunity for crimes against them,” said Ane Bonde.

International Day to End Impunity for Crimes against Journalists

November 2nd is the ‘International Day to End Impunity for Crimes against Journalists’ (IDEI), as proclaimed by Resolution A/RES/68/163 during the 68th session of the United Nations General Assembly. The date commemorations the kidnap and killing of Claude Verlon and Ghislaine Dupont, two journalists for the French radio station RFI, in Mali in 2013.